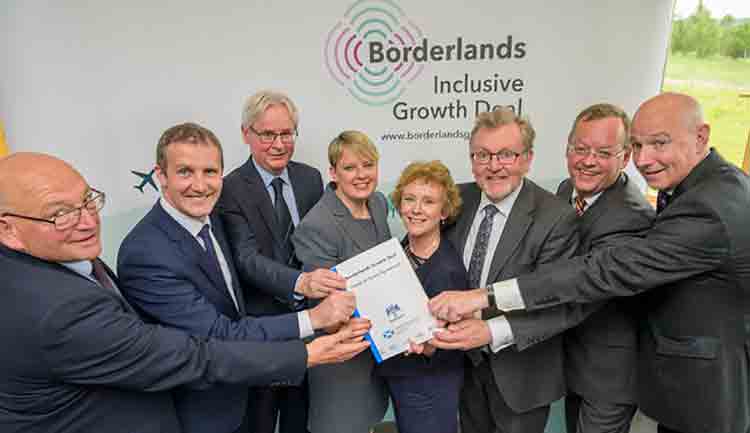 The signing of the formal agreement, which took place at the Mountain Bike Centre of Scotland at Glentress in the Scottish Borders, is a major step towards the funding of agreed projects and programmes put forward by the Partnership to the two governments.

The long-term benefits of the deal will reach all parts of the Borderlands area, driving inclusive growth and delivering significant and lasting benefits for individuals, businesses and communities.

“It’s fantastic news that the UK Government is to invest up to £265 million in the Borderlands Deal. This is an ambitious approach to cross-border working between Governments, local authorities and partners which will boost economic growth by helping existing business, encouraging new ventures and bringing a wealth of improvements to people who live and work in the area and to visitors.

“The Borderlands Deal has made huge progress in the last 18 months. I’d like to thank the five ‎local authorities who have worked so well together, along with the UK and Scottish governments, to achieve this.

“The south of Scotland and northernmost parts of England operate as a single economic area and it is important the border is not allowed to become an obstacle to development.

“To date the UK Government has committed more than £1.41 billion of Growth Deal investment to support sustainable growth in Scotland and create jobs and opportunities for the future.”

“I am delighted we have reached this important milestone in signing Heads of Terms for the Borderlands Deal. Successful delivery of the deal will create jobs, protect existing ones and extend the benefits of economic growth to even more communities across Scotland.

“Alongside the establishment of a new enterprise agency for the south of Scotland, and activities of the South of Scotland Economic Partnership, the Scottish Government’s £85 million investment will deliver significant and lasting benefits right across the region.

“The Scottish Government has so far committed more than £1.7 billion over the next 10 to 20 years to City Region and Growth Deals and related investments across Scotland.”

“This once-in-a-generation deal will deliver unprecedented investment in the Borderlands region while strengthening our cross-border links.

“We have moved closer to finalising a deal which will deliver over 5500 jobs, dramatically improve transport and digital connectivity, boost tourism and generate around £1.1 billion of economic benefits for the region.

“With the combined strength of the UK, Scottish and local governments, let’s use this Borderlands Deal to realise a new era of regeneration, inclusive growth and limitless economic opportunities for the Borderlands and the whole of the Northern Powerhouse.”

Co-chairs of the Borderlands Partnership, Elaine Murray and Peter Jackson welcomed the signing of the Heads of Terms.

“The Borderlands Inclusive Growth Deal will have a transformational impact on the whole region, with the potential for 5,500 jobs, millions of extra tourists and improved

mobile and digital connections thanks to the funding from the two governments and the additional investment the deal will attract.

“The unlocking of investment in our towns will generate a predicted £1.1billion uplift in the region’s GVA and the partners will be able to deliver individually and collectively a range of projects which will not only improve the area for existing residents but also encourage more to move here, which will help address some of the common challenges we face.”

“The signing of the agreement today is a vital step towards the next stage of the Borderlands Inclusive Growth Deal, enabling the Partnership to finalise the business cases for the agreed projects and programmes and to access the funding to take these forward.

“Significant work has gone in by all the partners and the two governments to get to this stage, and thanks to the very close working relationship we’ve made excellent progress to date and have no doubt that will continue as we all work towards signing the full deal agreement next year.”

Specific funding has been confirmed for some projects, subject to full business cases, including £8 million for a Dairy Innovation Centre in Dumfries and Galloway, £10 million to support natural capital innovation across the Borderlands region, £19 million for the Mountain Biking Innovation Centre in the Borders, £15 million for Carlisle Station in Cumbria and £5 million for Alnwick Garden in Northumberland. In the south of Scotland, £31 million will develop tourist attractions, £20 million will enhance the quality of rural places, £15.5 million will enhance business infrastructure and £7 million will develop key skills needed to boost the visitor economy. A feasibility study into the extension of the Borders Railway from Carlisle to Tweedbank will also be funded by both governments to the tune of £10 million.

The deal will also mean an investment of £31m in green energy projects, with much needed improvements in digital and mobile connectivity across the region. The importance of our towns will be the focus of a place investment programme linked to our Destination and Business Infrastructure investments.

It is anticipated that this investment will deliver an extra 5,500 job opportunities, attract over 4 million extra tourists and unlock investment in towns across the area, boosting the region’s economy by £1.1 billion.

As part of the next stage of the deal process, a formal Partnership Board will be

established, which will include the five local authority leaders, a private sector representative from a to be established Economic Forum, and advisors from both governments and other private and public bodies.