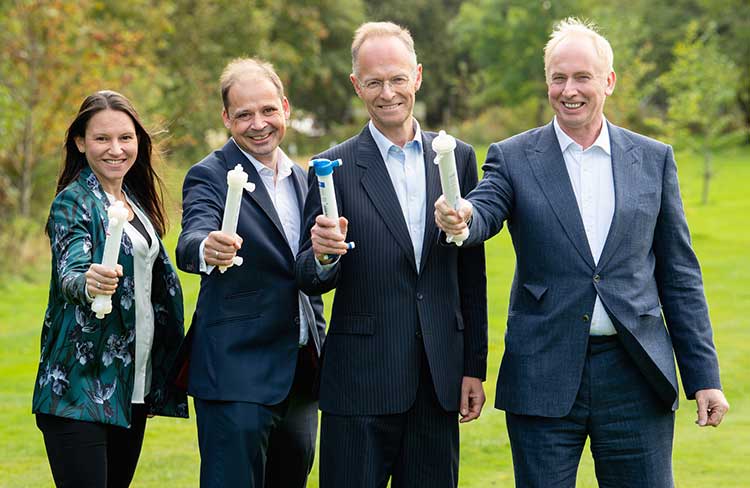 Invizius, the University of Edinburgh spin-out whose technology could help reduce the high death rates amongst dialysis patients, has raised £2.75m from a consortium of investors.

The funding round was led by Mercia and included Downing Ventures, the University’s Old College Capital fund and the Scottish Investment Bank. The latest investment will support the company as it conducts pre-clinical testing and manufacturing, and prepares to enter clinical trials and to raise Series A funding within 18 months.

Invizius’s technology stems from research by the company’s co-founder and CTO, Dr Andy Herbert, and his team who believe it could reduce the huge death toll from cardiovascular disease among long-term dialysis patients. Currently life expectancy on dialysis is just one-third of normal, and half of patients die from cardiovascular complications. The problem is that the immune system sees the dialysis filter as a foreign body, creating inflammation that damages the cardiovascular system over time, and multiple treatments.

Invizius’s H-Guard™ product is a powerful anti-inflammatory that can be used to coat the filter surface to ‘hide’ it and prevent an immune response. The technology also has potential for use with devices such as heart and lung machines, stents and grafts or in organ and cell transplants. Invizius has won awards including OBN Best Innovative Medtech and was named as one of the Fierce 15 Medtech companies to watch.

Richard Boyd, co-founder and CEO of Invizius, said: “Our goal is to bring much-needed improvement to the lives of three million dialysis patients. This investment allows us to take a big step towards this, and we are delighted to have won the backing of a consortium of smart, well-funded investors.”

Invizius was Mercia’s first investment following its partnership with the University of Edinburgh. Since its initial £500,000 investment in April last year, it has worked with the company to develop its offering and attract other investors.

The Mercia team was led by Dr Nicola Broughton, Head of Universities, and Marcus Henderson, Investment Director. Nicola said: “Invizius is a great example of how Mercia can ‘seed’ a university spin-out and build it to attract the attention of high-quality investors. With our sector knowledge, experience with early-stage businesses and local presence in the market, Mercia is ideally placed to work with Invizius, and others like it, to create new Scottish success stories.”

The Invizius team is supported by Edinburgh Innovations (EI), the University’s commercialisation service. EI has also helped develop the partnership between Mercia and the University, and manages Old College Capital.

Dr George Baxter, Chief Executive Officer of Edinburgh Innovations, said: “This substantial investment reflects the great promise we’ve seen in Invizius from the initial identification of novel science, and the University is pleased to join the consortium in backing this technology, which holds so much potential for so many people.”

Invizius received early-stage funding from Scottish Enterprise’s High-Growth Spinout Programme, with the agency now following this up with support from its investment arm, the Scottish Investment Bank (SIB).

SIB Director Kerry Sharp said: “Invizius has built a reputation, both domestically and internationally, as one of the world’s most promising MedTech companies in a very short space of time. The investment the company has attracted is testament to the momentum gained in developing its potentially life-saving technology. We look forward to supporting Invizius through the next stage of its growth journey.”