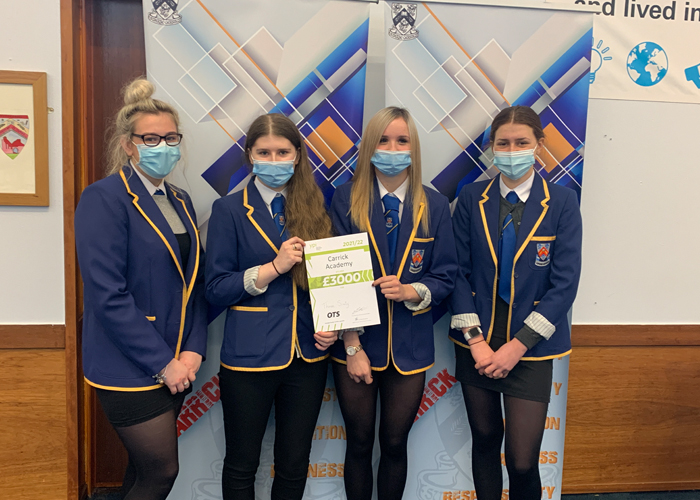 NATIONAL rail contractor, QTS Group, has announced its fifth and final year of support for the Youth and Philanthropy Initiative (YPI) in Ayrshire.

The specialist rail contractor kicked-off its final year of collaboration with the active citizenship programme at Carrick Academy in Maybole, with a ‘grand final’ event that empowered students to compete to win £3000 for a local charity.

The event took place on 13 December, where the winning team of pupils won the funds on behalf of Three Sixty, a local mental health charity based in Ayr.

Carrick Academy is the first of more than 20 schools given the opportunity to win money for their chosen charities during the 2021/22 academic year, thanks to QTS Group’s financial support.

QTS has supported the programme for five years and recently announced that this year will be its last involvement.

YPI was launched in Scotland by the Wood Foundation in 2008 and is the biggest independent initiative currently being delivered in Scottish education.

Alongside providing the grant money, members of the QTS team sit on the judging panel for all YPI Final Showcases and provide mentoring support for students embarking on the process. This includes reviewing presentations and providing feedback ahead of the event.

Since 2016, QTS has partnered with schools across Ayrshire through the programme, funding £150,000 for young people to secure grants for local charities, including SeAscape, Wheels in Motion and Whiteleys Retreat.

The rail construction specialists will work with a further 20 local schools this year to wind up the successful collaboration.

Alan McLeish, Managing Director of QTS said: “Working alongside The Wood Foundation to deliver the YPI programme in Ayrshire over the last five years has been a pleasure. It’s extremely important to us, as a local business, to stay connected to the issues that are affecting our communities, and the partnership has facilitated this in so many ways.

“We’ve helped some of the region’s most vulnerable people through the charities chosen, while also investing our time into helping young people in our community become more active citizens. It truly has been a win-win for us, and we look forward to engaging with more schools for the remainder of the academic year.”

Ali MacLachlan, UK Director at The Wood Foundation, said: “We are incredibly proud of our successful partnership with QTS. Their commitment to empowering young people as an active funding partner, dedicating not only funds but time and expertise, in Ayrshire has made an incredible difference to the programme over the past five years.”

Elaine McEwan, Head Teacher of Carrick Academy, added: “YPI provides a platform to consider social injustice and make youth voices heard in a creative and innovative way. It also allows young people to learn about the vital role charity organisations play in supporting local communities. For many, this is something that, unless they have personally been reliant on support from these organisations, they may know very little about.

“Part of our role as educators is to ensure young people develop an understanding of the difficulties faced by people living in their local communities and we are pleased to have had the support of QTS to be able to do that over the last five years.”