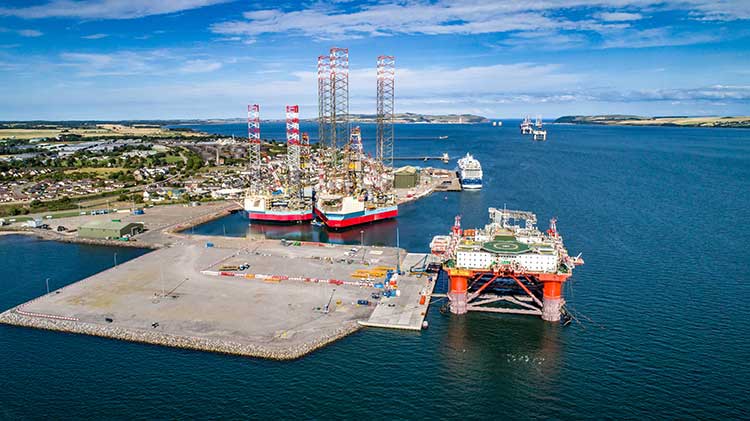 The Port of Cromarty Firth recorded its best ever year in 2018, according to its annual review released today, with a turnover of £11.44m, nearly £3m more than last year’s previous turnover record.

The Port of Cromarty Firth is a Trust Port, which means that 100% of surplus income is reinvested into future development for the benefit of the local area and its stakeholders. Last year, the Port generated £4.1m surplus income.

At the end of 2018, the Port won a £10.6m contract from the Moray East offshore windfarm, which paved the way for a £31m investment in its new quayside. This is the biggest success story for the Port for 2018 and will bring jobs and opportunities to the local area.

2018 saw the global stabilisation of oil and gas prices and slightly increased drilling activity in the North Sea. As a result, the Port welcomed nine oil rig Inspection, Repair and Maintenance (IRM) projects, the highest since 2010.

The Port also celebrated 40 years of welcoming cruise ships into the Cromarty Firth. In 2018, the cruise sector continued to go from strength to strength with 95 ships and 163,000 passengers visiting the Highlands, once again making it the busiest port in Scotland.

Bob Buskie, Chief Executive of the Port of Cromarty Firth, said: “Not only was 2018 a record year in terms of turnover and surplus, it was a year in which we saw strong activity in all market segments.

“Our new cruise record equates to an 11% increase in the number of passengers, following on from last year’s 54% increase.

“2018 finished with the successful award of a major contract for the Moray East offshore windfarm against national and international competition, proving once again that our region is extremely competitive and that people in the Highlands have the necessary expertise and skills to deliver any North Sea energy project.

“This unlocked the funding necessary for a new £31m berth and laydown area development to begin. This is another significant investment which will bring value to the Highlands for decades to come. When completed in Spring 2020, this energy and cruise hub will deliver additional space for the different industries that visit the Firth and the construction of the new berth is expected to generate over 100 jobs locally.”

Richard Ballantyne, Chair of the Board of Directors, said: “I am delighted to report on behalf of the Board that 2018 was the best year in the Port of Cromarty Firth’s history in terms of financial performance.  These results are a direct outcome of the dedication shown by every member of the Port’s staff.

“We have one of the highest-performing teams of any port in the UK, with financial productivity per head being higher than any other similar port. The team are highly appreciated, and significant sums are invested in their training and development. As a result, we were delighted to be recognised by the Scottish Council for Development and Industry (SCDI) with an award for Excellence in People Development.”

“The growth we have experienced in recent years and the investment the Port has made in securing opportunities for the local area are now recognised at a regional and national level. The Port is now acknowledged as a national strategic asset and, as a result, the Port is playing an increasing role in regional development.”

The Port exists to benefit its diverse stakeholder groups. This includes staff and customers, businesses throughout the region, local communities and local and national Government. Throughout 2018, the Port’s programme of stakeholder engagement continued, with quarterly meetings with the nine communities that border the Firth, Port users and staff and an ongoing investment in community projects through the Community Sponsorship Fund.

Through its Community Sponsorship Programme, the Port donated more than £20,000 to good causes around the Firth in 2018. Launched a number of years ago, the programme sponsors a variety of different community projects and clubs.  This year’s recipients include Ross Sutherland Rugby Football Club, Lord Lieutenant’s Youth, Cromarty Care Project and Invergordon Community Council.

A number of projects were launched for the benefit of the local area. The port worked with the local Invergordon Job Centre Plus to train and recruit local people as security officers for the cruise season. A further 8 local people were trained and recruited in the same programme in 2019. Over 200 pupils took part in the third Great Big Firth Beach Clean, (part of the Marine Conservation Society’s Great Big British Beach Clean), in September. A local content clause was added into the tender for the Phase 4 development contract. The successful bidder (Roadbridge UK Ltd) is undertaking a large number of projects including engineering projects with local schools, employability workshops with Inverness Prison, and support for both Invergordon and Cromarty Community Development Trusts.

The Port was delighted to be named winners of the Sustainability Award at the inaugural Maritime UK Awards in Southampton this week. The Maritime UK Awards are a brand-new set of awards which aim to celebrate businesses and organisations from the entire spectrum of the industry – from leisure to shipping, professional services to ports and engineering to advanced manufacturing.