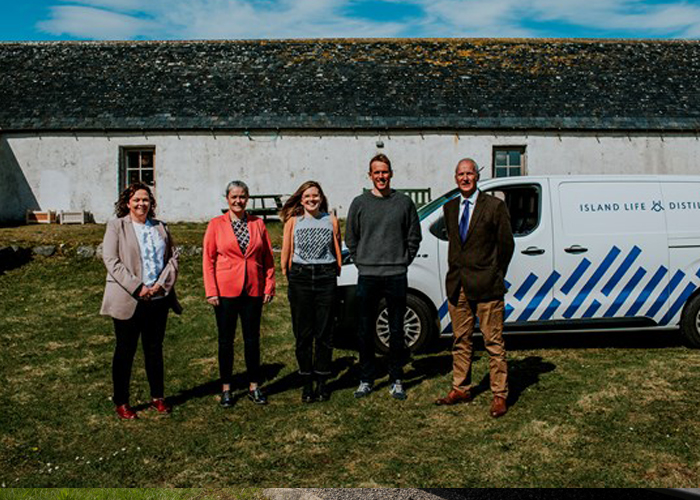 AN 18th century steadings building in the Outer Hebrides is set to be transformed into a distillery, community hub and visitor centre.

The ambitious project is being led by owners of North Uist Distillery, which acquired Nunton Steadings in Benbecula in 2020.

Highlands and Islands Enterprise (HIE) awarded the company up to £250,000 investment for the development, which includes installation of distilling equipment and building adaptation.

Owners Jonny Ingledew and Kate Macdonald have operated the business since 2017 and now employ 10 people. They currently produce and bottle gin from industrial units in Bayhead, North Uist.

The redevelopment of Nunton Steadings will give the couple the space to build on the success of their popular range of premium ‘Downpour’ gins. A shop, bar and tasting room are already set up and operating from Nunton Steadings, which is proving popular with visitors and local people. Work has begun on lime rendering on the listed building.

The business also aspires to produce a world-class single malt whisky at the new premises. Using locally grown bere barley produced by crofters, the production and bottling of gin and whisky will be carried out on-site. It is expected that six new well-paid skilled jobs will be created over the next three years.

Kate said: “We are keen to work with crofters to create a supply chain of bere barley on the islands with the intention of being able to malt the barley, allowing for full grain to glass production.”

“We aim to provide tours of the distillery covering the whisky and gin production process and sharing the stories of the historic building and the surrounding areas. The support from HIE allows us to build a home for our products here in Benbecula, with a visitor centre and shop that will hopefully attract more visitors to the area.”

Nunton Steadings is a Grade-B listed building of significant historical and cultural interest to the area. It was constructed in its current form in the early 1700s on the site of a nunnery dating back to 1300.

Built on what was then a substantial farm, the structure was seized with the land when crofters raided Nunton in the aftermath of the Great War.

Since then, local crofters have housed cattle and stored animal feed inside the building until it fell into disrepair and was transferred to the Uist Buildings Preservation Trust, later renamed Nunton Steading Trust, which saw the building renovated in the late 1990s.

Nunton Steading Trust placed the building on the market earlier in 2020.

Joanna Peteranna, area manager at HIE’s Innse Gall team, said: “This exciting development will add to the rich variety and high-quality food and drink offering found throughout the Outer Hebrides. Establishing a distillery and visitor centre in a historic building with so many stories to tell, will help attract more visitors. It will also add another distillery to the gin and whisky production trail in the Outer Hebrides and will create several high-quality jobs.”

With Scotland’s drive towards net zero carbon, this project will be developed sustainably with the aim of reducing impact and achieving net zero in its activities. The building will also comply with the latest building regulations and will use modern, efficient machinery leading to reductions in energy consumption.