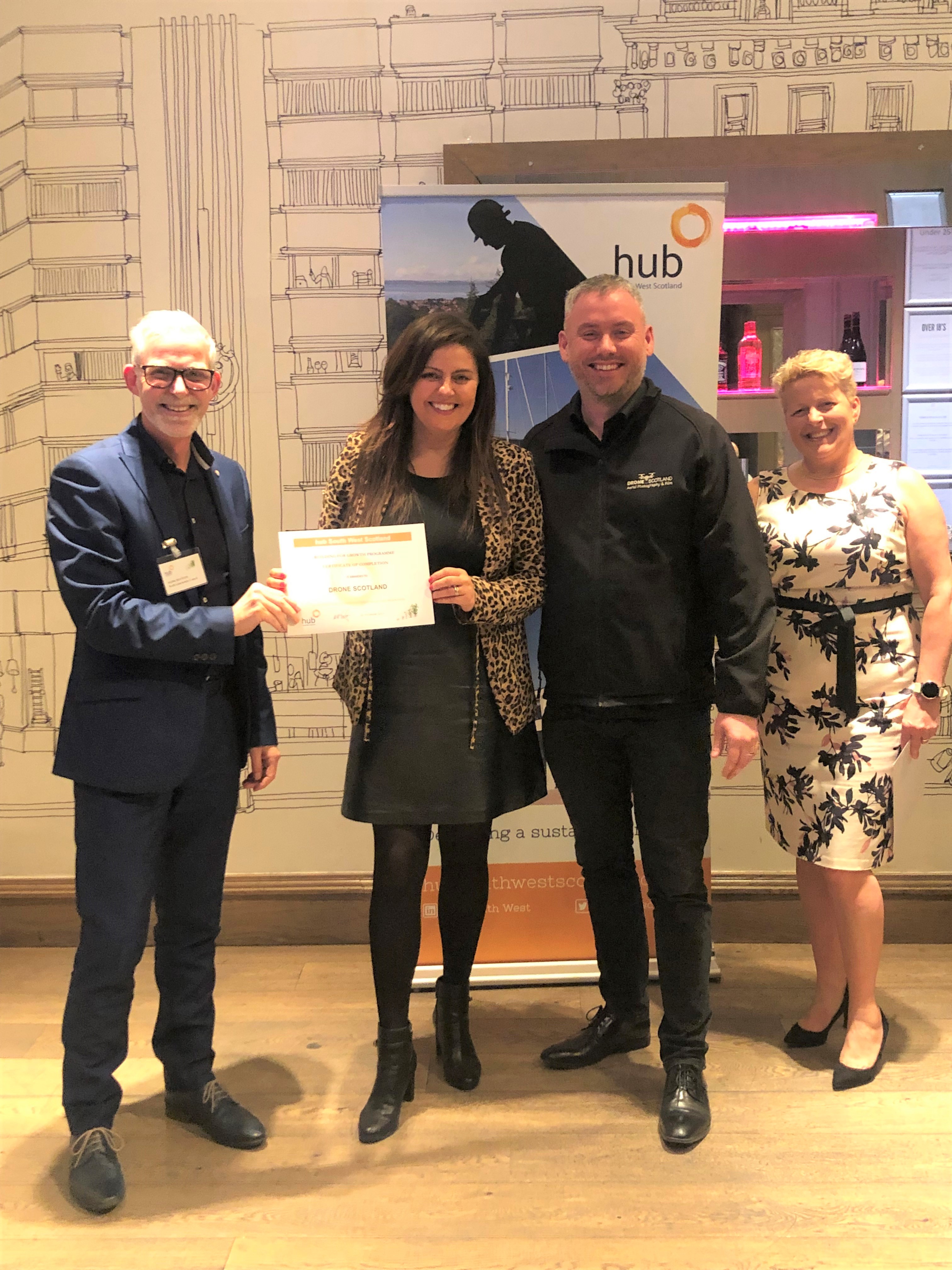 A HUSBAND and wife team whose business, Drone Scotland, has secured a successful niche in aerial photography and film solutions, has been announced the winner at hub South West’s Tenth Building for Growth Awards Event held last week at Glasgow’s Corinthian.

Based in Uddingston, the business run by Bjorn and Michele Aaen, is a drone/unmanned aerial vehicle (UAV) company with Civil Aviation Authority (CAA) permission to operate drones with a carrying capacity of up to 20kg. Now in its third year, Drone Scotland has doubled sales each year since launch.

Managing Director, Michele Aaen, said: “This is a fantastic achievement. The drone industry is in its infancy. Its growth is predicted to be exponential through until 2030, so it’s great to see that we are now being recognised by such highly influential organisations as hub South West.

“It has supported our business over the last year and we look forward to growing alongside it. We are already working with some of its Tier 1 contractor partners and our aim is to develop further these relationships.”

Suzanne Stevenson of Graham Construction, who was a member of the judging panel, said: “The calibre of entries was high and Drone Scotland, with its ability to provide a diverse range of services to the benefit of the UK construction industry, is a well-deserved winner.

“The team there has developed a market-leading model which delivers fantastic results for its clients. I was particularly impressed by some excellent examples of impactful community engagement projects from a company which is always willing to go the extra mile when its services are required.”

A public-private partnership funded by Scotland’s business development agencies and a clutch of Tier One contractors including Morisons, Ashleigh, Graham, Morgan Sindall and Keir, hub South West’s development programme is aimed at ambitious companies in construction and related sectors based in Lanarkshire, Ayrshire and Dumfries and Galloway.

Now in its tenth cycle, it’s Building for Growth programme is targeted at ambitious local SMEs looking to grow in a sustainable manner by building upon the skills and internal capacity to take on increasing volumes of work. Over 100 delegates from 82 companies across the south-west Scotland region have now graduated from the programme.

Margaret Milton, community benefits coordinator at hub South West, said: “Our Building for Growth programme has already delivered success to the leaders of its participating companies by both broadening and deepening their grasp of the factors needed to win more new, bigger contracts from the Tier One contractors.

“We anticipate that Michele, Bjorn and the other nine companies which participated in our tenth Building for Growth programme will follow in their footsteps.”