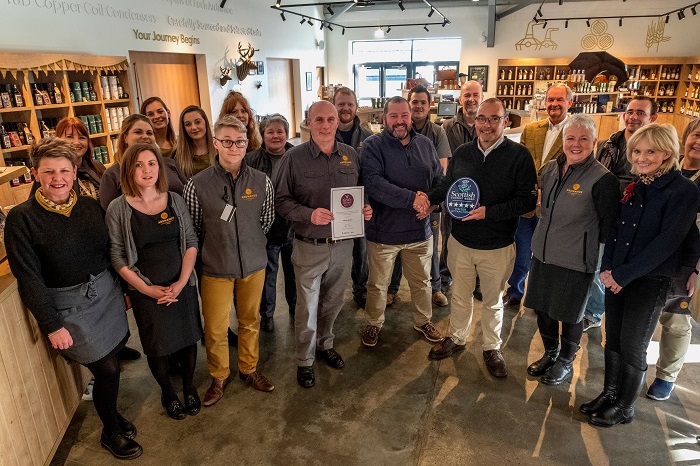 The Isle of Islay’s ninth and newest distillery has received a Five Star grading from VisitScotland.

Ardnahoe Distillery, situated on the North-east of the island, received top marks in the national tourism organisation’s Quality Assurance (QA) Scheme in recognition of its exceptional standards. The QA Scheme is a benchmark for quality across the tourism industry and operates across accommodation, visitor attractions and food sectors.

The distillery opened in April this year and has so far welcomed 24,000 visitors. The attraction offers a range of tours, tastings, a gift shop and a restaurant. As the restaurant has a commitment to using quality locally sourced produce, it received VisitScotland’s Taste Our Best award.

Along with his sons Scott and Andrew, Ardnahoe was founded by Stewart Laing, who has over 50 years’ experience in the whisky industry. His strong affinity for Islay and a reverence for its distinctive, peated malt whiskies meant it was the perfect place to open a distillery and in 2015 he found the four-acre site by Loch Ardnahoe.

Work began in late 2016 and the first runs of distillation began in late 2018. In April of 2019, Ardnahoe was officially opened to the public by Lord Robertson of Port Ellen. They have an expert visitor centre team on hand to ensure visitors have the best experience possible.

Ardnahoe becomes one of only two distilleries on the island to receive a Five Star grading from VisitScotland. It is the third distillery in Argyll & Bute to receive the accolade.

Regarded by many as ‘whisky island’, Islay is just 25 miles long and 15 miles wide but boasts a remarkable nine distilleries. Bowmore is said to be one of the oldest distilleries in Scotland, dating back to 1779.

Paul Graham, Visitor Centre Operations Manager, said: “The whole distillery team at Ardnahoe have a real passion for whisky and Islay. Coupled with their expert knowledge and warm welcome, they have offered an exceptional experience for visitors since we opened in April. I’m thrilled to see our hard work recognised by this award from VisitScotland.”

David Adams McGilp, VisitScotland Regional Director, said: “Congratulations to Paul and his team on this exceptional achievement. To achieve a Five Star grading on the first time of asking is a testament to the hard work of this business to offer a quality experience.

“Our Quality Assurance Scheme is world-leading and provides a trusted, independent and impartial source of information for visitors. It is about much more than just a star rating – it is about the entire visitor experience and investing in the business to make it as economically sustainable, and profitable, as it can be.”