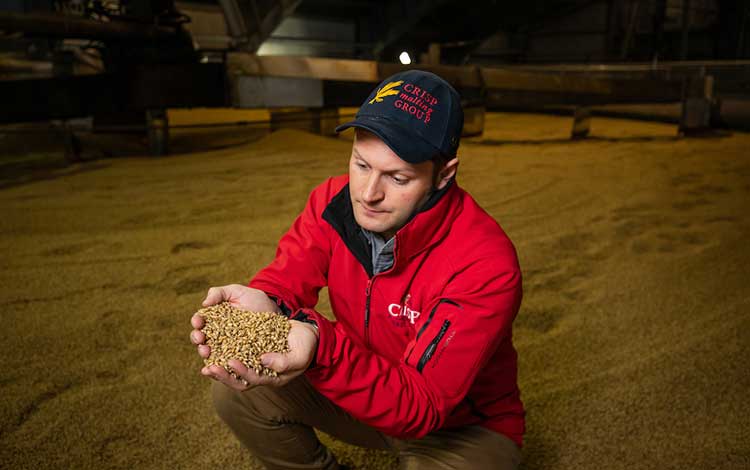 Following a £3.3m investment in a new peat kiln in Portgordon, Crisp Malt is stepping up its supply of premium peated malt to the craft distilling industry with news of an five-year agreement with Holyrood Distillery in Edinburgh.

The exclusive relationship to produce and supply speciality malts, including its premium peated malt, to the recently opened distillery comes as Crisp Malt looks ahead to its 150th anniversary in 2020 and to supporting more craft distilleries with increasingly innovative approaches to the use of different malts in whisky.

Crisp Malt first started producing peated malt in 2005. With demand for peated malt increasing, driven by experimental craft distillers and from Japan, Crisp recently upgraded its maltings facility in Portgordon with a new peat kiln. The move significantly increases production capacity from 17,000 tonnes to 37,000 tonnes of peated malt a year.

The new peat kiln incorporates a custom-made peat burner designed to maximise flavour. Built by Don Valley Engineering in Doncaster, the new burner gives Crisp the capability of reaching very high phenols levels and the company plans to launch a new ‘Super Heavy Peated’ malt product on the market in 2020. The efficiency of the burner optimises the peating process to maximise phenols while minimising peat use.

The new kiln uses peat sourced locally from St Fergus near Peterhead and barley from nearby farms through direct relationships with local farmers. The production facility at Portgordon, which was built in 1979, still uses a traditional malting method which includes getting the smoke into the barley in the peat kiln while it is still wet during a 24-hour smoking process. This process imparts a distinctive smokiness and deep flavour which distinguishes Crisp’s premium peated malt.

Colin Johnston, Crisp’s Scottish Craft Sales Manager, has been working closely with Holyrood Distillery’s founder David Robertson and his distilling team to help them select different speciality malts as part of their quest to create the maximum flavour in their whiskies. As part of the new agreement, Holyrood have recently ordered their first batch of peated malt and will be running it in the coming weeks at the distillery.

Crisp also supported Glasgow Distillery with the release of its new peated whisky The 1770 Peated Release No. 1, which was launched in August. In 2016, Crisp crushed 60 tonnes of malt on rudimentary equipment and hand bagged it for Glasgow Distillery. This has now grown to supplying 140 tonnes in 2019 by bulk truck for delivery into the distillery silos.

This direct and hands-on relationship with customers, which allows craft distillers to be more experimental, is something Crisp specialises in.

“Our new agreement to supply Holyrood Distillery is a perfect example of that. The team there are looking to create the maximum amount of flavour in their whiskies. Our new peat kiln at Portgordon and our traditional malting process produces an exceptional consistent flavourful malt. We’ve been able to go in and work closely with them to supply the special peated malt they need for their smoky whisky.”

David Robertson, the founder and head of operations at Holyrood Distillery, said: “We love working with Crisp.  They totally get our focus on flavour and are as passionate about it as we are.  We have partnered with them and very much look forward to exploring malt styles through different varieties, process techniques and roasting and toasting.  We can’t wait to crack on, test and learn and deliver flavours seldom, if ever seen before, in single malt Scotch whisky.”

In addition to its new agreement with Holyrood, Crisp is also the sole malt supplier to other craft distilleries such as Lagg, Lochlea, Raer, Rassay, Annadale, Lochlea, Ardnahoe, Crabbies, and Strathearn.