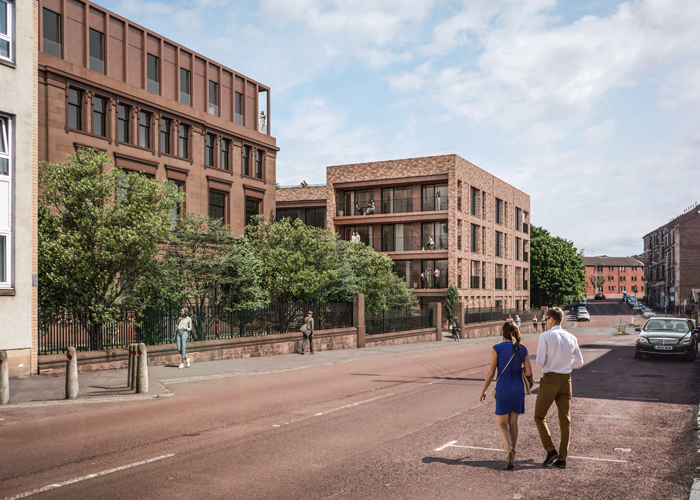 A CGI of Napiershall Street

The building, which has lain vacant for a number of years, will be converted into 24 properties including four penthouse apartments. Plans also include the development of a new L-shaped block within the grounds for 25 apartments.

In addition to high-quality living space, if approved, the proposed four-storey residential development would feature a whole host of amenities for residents, including an incredible rooftop residents’ garden designed to create the perfect environment for outdoor dining, socialising, exercise, and wellness.

The site closed as a school in the 1980s and has been used most recently as offices. The plans, which were submitted to the Glasgow City Council on Wednesday, August 10th, detail how Kelvin Properties aims to convert the former Napiershall Street Centre to apartments while retaining its architectural features.

The building will be developed with sustainability in mind. Kelvin Properties is planning to adopt a fully green energy source to power all the apartments. Residents will be encouraged to travel more sustainably, with bicycle parking and electric vehicle charging points provided for all residents. A total of eight active EV charging stations are also included as part of the plans.

Marc Taylor, Director of Kelvin Properties, said: “Our plans will allow a community to flourish and reinvigorate an incredible building, while protecting the environment and boosting the local economy.”

“Glasgow’s west end continues to be a welcoming and highly attractive place to live and demand for properties continues to grow. We’re very pleased to have submitted plans for the redevelopment that would restore this stunning building to its former glory and provide much-needed high-quality homes in a fantastic location. Although the building isn’t listed, we will retain its fantastic architectural features.”

“We have also made sure to maximise outdoor space for the residents – we feel the rooftop space will be particularly attractive.”

Situated between Glasgow’s Great Western Road and Maryhill Road, the site is attractively located near some of the city’s most desirable amenities including Kelvingrove Park and University of Glasgow, and provides easy access to the city centre, motorway and two nearby Subway stations.

The development is planned to get under way as early as Spring 2023 following planning consent being granted.

Kelvin Properties is behind several high profile and popular recent developments in Glasgow, including Waverley Park in Shawlands, which sold out in less than four weeks.

The award-winning developer, which is headquartered at Charing Cross, Glasgow, just a stone’s throw from its Mitchell Apartments development, recently announced its first venture in Scotland’s capital.  A development on Logie Green Road, which will provide much-needed affordable housing in the Canonmills area of Edinburgh, is now underway.