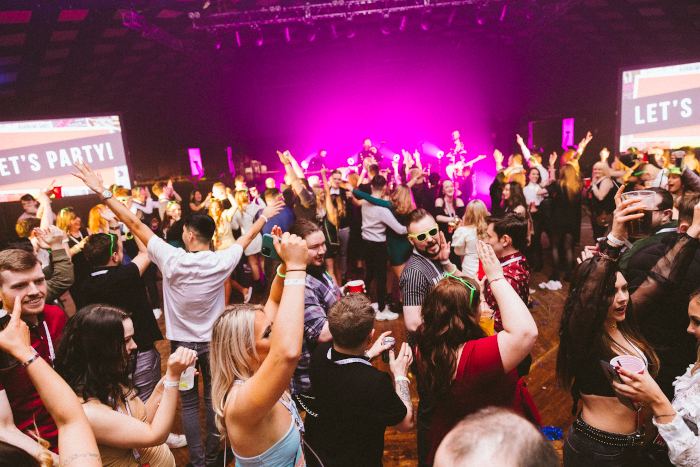 The Group shut their doors to reward their entire 500-strong workforce with an opportunity to ‘get their rocks off’ at the famous Glasgow Barrowland.

Formed in 2007, the award-winning company comprises eight hotels, two nightclubs, two pubs, a fitness & leisure centre and luxury spa. Buses picked teams up from venue locations such as Biggar, Wishaw, Coatbridge, East Kilbride and Howwood, and took them on a mystery tour.

When they arrived at the iconic lit-up venue, the whole team was given the rock-star treatment. And the Group’s founder Steve Graham, briefly took to a stage, which has welcomed everyone from Simple Minds to David Bowie and Oasis, to congratulate the team on a successful year while showcasing a video of highlights.

The party got into full swing, with the team giving the famous wooden sprung dance floor a good workout as they showed off their best moves to music from local band Splash.

The entire evening was free for the Manorview team – all that was needed was a wristband, a lanyard pass, and a bit of swagger.

In true rock n roll fashion – the ‘tour’ buses arrived to take people back to their original collection points after the party.

The purpose of this yearly event is to reward the team, while also strengthening the foundations of the Manorview culture – which states that everyone’s contribution is valued and every individual works together as one team.

Like the famous Barrowland Ballroom, the Manorview Annual Team Party, is achieving legendary status, with the team already trying to guess the ‘secret location’ for next year.

David Tracey, Managing Director, Manorview Hotels & Leisure Group, said: “We’ve set the bar high, and now we’re challenged to ensure every year we hit the mark! We put a lot of effort into this because we believe in rewarding our people. We are one team, and this is a great event which brings everyone together.”