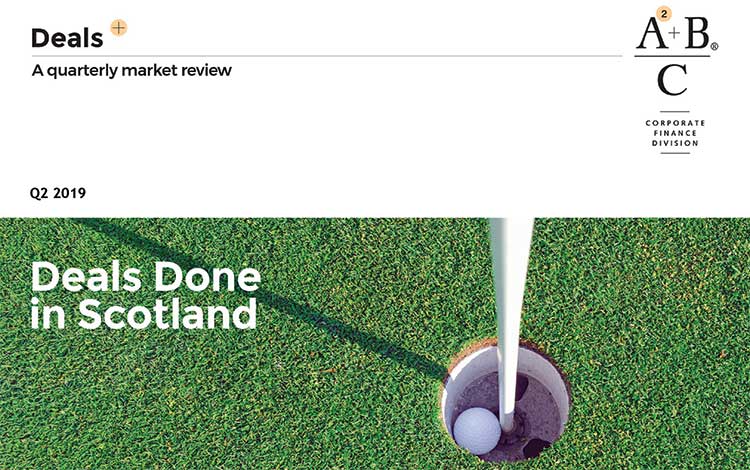 With economic, political, and regulatory uncertainty showing no sign of relinquishing it is no surprise to have seen deal volumes fall in certain sectors throughout 2019, according to the latest Deals+ update from Anderson Anderson & Brown LLP’s (AAB) Corporate Finance team.

However, despite this, there are positive signs in key markets that deals are still happening at attractive prices.

To download a full report of the deals covered by the AAB Deals+ Q2 2019 report, click here.

There were a couple of very large upstream Oil & Gas transactions announced during Q2 2019 with Chrysaor’s acquisition of the UK Oil & Gas assets of ConocoPhillips for c.$2.7bn and Ithaca Energy’s acquisition of Chevron’s North Sea assets for c.$2bn. It is clear that in order to extend margins and increase returns from the ageing North Sea basin a leaner approach is required, one that will rely not only upon technological investment and production efficiencies arising in-house.

In the wider Scottish market, the stand-out transaction during the quarter was the sale of bus manufacturer Alexander Dennis to NFI Group for £320m. DC Thomson also continued its acquisition spree during 2019 with the acquisition of Glasgow based PSP Media, a deal which is another key step in transforming DC Thomson from traditional publisher to modern media creator.

From a fundraising perspective, we continued to see strong positive momentum with valuations remaining resilient with a number of oversubscribed Series A funding rounds. For example, the c. £5.4m equity investment in Dundee based Intelligent Growth Solutions from US based 2SG Ventures, and Money Dashboard’s successful crowdfunding campaign yielding c.£3.7m.

To download a full report of the deals covered by the AAB Deals+ Q2 2019 report, click here.