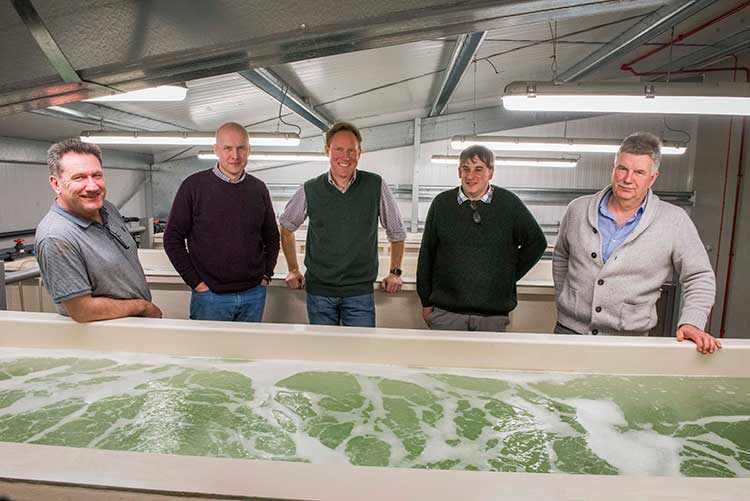 The brand new Recirculation Aquaculture System (RAS) cleans and recycles the majority of the water used in the system every day to provide premium locally grown prawns, without contaminating the environment. The 1500m² Balfron farm is the first of its kind in the UK; and the company has ambitious plans to expand, providing fresh prawns to restaurants across the UK.

The farm will produce the world’s most popular prawn variety, the Pacific Whiteleg Shrimp, better known as the King prawn. Normally native to the Eastern Pacific Ocean, the prawns at Balfron will be grown in over 300 tonnes of water capable of holding up to a million fresh prawns, which will grow to reach an average size of 25g each.

The majority of the UK’s King Prawns are currently sourced frozen from farms in the Far East and Central America, a model widely criticised for its damaging environmental practices. Great British Prawns’ land-based farms will deliver the prawns from tank to plate within 24 hours, with no need for freezing and with zero air miles.

Great British Prawns’ first farm has been designed to have minimal and an increasingly reduced impact on its surrounding environment. Using sustainable energy from an anaerobic digester on a neighbouring dairy farm, high levels of insulation and ground-breaking bio-filters to clean and recycle its waste, heat that would otherwise have been lost is used to produce food. As a result constantly improving design will allow future facilities to be virtually waste free and, because of the closed filtration system, won’t require the antibiotics and other medication, chemicals and manual handling used widely in the existing prawn farming industry, resulting in uniquely ‘clean’, fresh prawns.

With harvesting starting in summer 2019, the prawns will be available initially to chefs within a 2-hour radius of the farm (including Edinburgh and Glasgow) at a cost of ￡23/kg, a price similar to other shellfish such as langoustines. Other Great British Prawns farms are scheduled to open across the UK shortly.

“Most prawns have traveled 6,000 miles to reach a UK consumer with worldwide demand continuing to grow.  But we know that consumers are increasingly concerned about the environmental impact of seafood production and to be sustainable, the future of aquaculture really has to be land-based.

This farm has the potential to lead a transformation in the way seafood is produced.  We aim to meet growing UK consumer demand for regional and local food production with the reassurance of outstanding husbandry, provenance and sustainability.

This farm is a world-first in terms of technology and sustainability but it also produces some of the most outstanding and delicious prawns in the world.”

“I’ve worked in aquaculture engineering for more than 25 years and this project is truly setting a worldwide precedent that will change the way prawns are farmed in the future. Focusing on getting the Recirculation Aquaculture System (RAS) exactly right, along with mimicking the precise conditions required for optimal prawn development has been a precision project that has required painstaking research and engineering. The outcome is an approach that impresses on its engineering, as well as its sustainability and humane methods.”