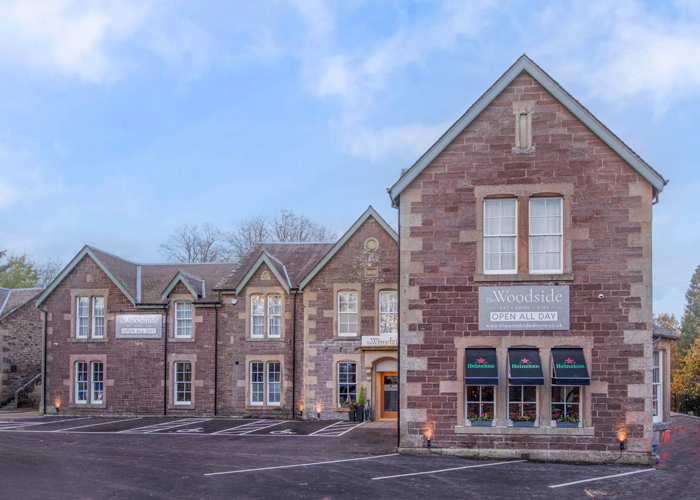 The Woodside in Doune

THE Woodside in Doune has been bought by hotelier Stuart Riddle and has just undergone a £1.4million renovation to restore it to be a hub for the local community. With the successful opening of the Woodside last weekend, this will be the third property in Stuart and Joanna’s hospitality portfolio.

“The opening has been a huge success. We held a soft opening on the evening 26th and served 82 dinners and have averaged 151 covers a day in the 9 days since. The feedback has been universally positive.

I don’t think any of us saw that level of business coming before we opened.

The staff have been fantastic, especially the senior team, who have really pulled off something quite special.”

The renovation process had not been without difficulty, as Stuart went on to explain:

“It became apparent early on during this project that the investment we had planned for was not going to be enough. The building was in a far worse state and required far more work than was initially envisaged. It was far more difficult in every sense than our two previous projects.

We suffered from lack of materials, lack of tradesmen and rapidly rising material costs.

It turned out to take nearly a year to complete as opposed to seven or eight months we hoped for when we started this.”

Stuart, along with his wife Joanna have established a portfolio of pubs, restaurants, and hotels.

He started his career working as a Commis Chef in the kitchens of AA Rosette awarded Hotels and had had a successful career with national pub/restaurant groups prior to starting his portfolio. He became head chef at the 2 AA Rosette Dunain Park Country House Hotel (aged 25) before going on to impress in various roles including, Menu Development Manager at the Spirit Group, Catering Controller at Bellhaven Pubs and finally as Head of Food Development (premium) at Greene King.

The Woodside is located in the heart of the Forth Valley and is accessible to residents and non-residents alike with a pub, coffee house, restaurant, terrace dining, 11 letting rooms and a function suite.