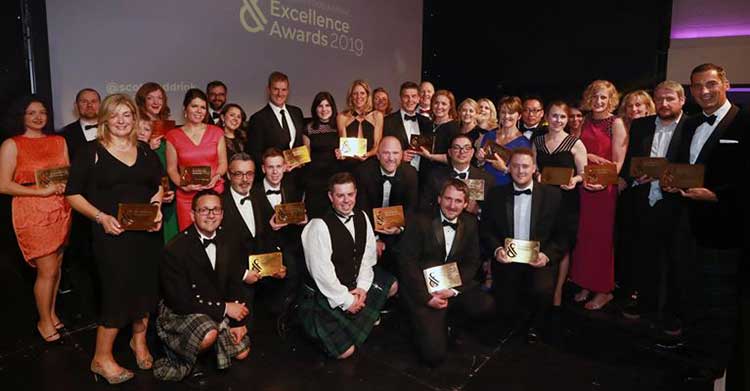 The winners at the 20th Scotland Food & Drink Excellence Awards

Among the big winners on the night were Loch Fyne Oysters, whose Kinglas Fillet of salmon scooped the top prize in the Product of the Year Category. North Lanarkshire-based Lazy Day Foods was named Business of the Year.

Hosted by restaurant critic, writer and broadcaster, Jay Rayner, the awards ceremony at the Corn Exchange in Edinburgh was attended by more than 800 people from across the industry and the wider community.

52 food and drink businesses from across Scotland were named as finalists across the 19 product and business categories.

“Winning an Excellence Award is more than simply having a well-written award entry – it’s testament to the commitment and dedication of our producers to creating truly exceptional products and business practices.

“The passion of the farmers, fishermen and food and drink producers within the industry is inspiring. The pursuit of perfection, combined with a genuine appetite for innovating, means we have some of the best businesses and products in the world and these awards give us the opportunity to celebrate that.

“Congratulations to all of this year’s winners and finalists.”

Among the guests was the First Minister, Nicola Sturgeon, who presented the Outstanding Contribution Award posthumously to one of Scotland’s greatest chefs, Andrew Fairlie. The award was accepted by his wife, Kate Fairlie and acknowledged the impact Andrew Fairlie had on the sector, and the instrumental role he played in inspiring an entire generation of Scottish chefs.

“It was an honour and a privilege to present the Outstanding Contribution Award. Andrew Fairlie was one of Scotland’s greatest chefs and his passion for and promotion of Scottish food and drink inspired many people both here and abroad. While Andrew was taken from us far too soon, his contribution to the industry and to Scotland will always be remembered.

“Our food and drink industry is one of Scotland’s success stories, with recent figures showing this growth sector achieved record turnover, so it was fantastic to celebrate the people and businesses who are behind these achievements at the Excellence Awards.”

The awards come in the wake of the announcement of the Scottish food and drink sector reaching a record high value, contributing £14.8bn to the Scottish economy.

Now in its 20th year, the Excellence Awards is restructured for 2019 and focusses on the standout products driving value and consumer choice in the market in line with the overarching Ambition 2030 strategy to double the value of the industry.

The awards are organised by Scotland Food & Drink in partnership with The Royal Highland and Agricultural Society of Scotland (RHASS) and headline sponsor Asda.