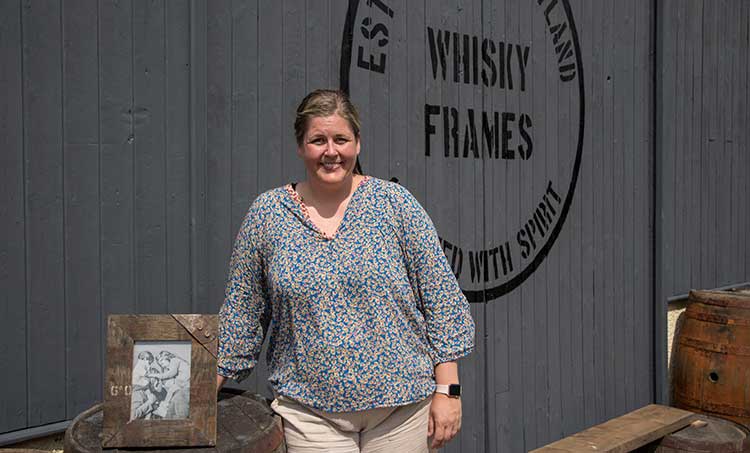 Kristen and Ross Hunter, founders of award-winning company, Whisky Frames, which re-uses whisky barrels to hand-make rustic photo frames, has gone from selling 200 a year, from their kitchen table, to 20,000 in two years, resulting in the creation of six jobs.

The company, which appeared on Dragons’ Den in January, was established by Kristen, who is originally from Minnesota, USA and her Scottish husband Ross in 2016.  Although investment wasn’t offered, the couple have reaped the benefits in brand awareness.

The idea for the company came after Kristen was looking to buy a quirky Scottish photo frame and found a gap in the market for handmade frames which were steeped in history and could be personalised.

Her research to create her own began around the whisky industry, where she admired the work, history and craftsmanship of cooperages, which is a skill passed on from generation to generation.

Coopers and distilleries traditionally stamp the whisky barrels they’ve made using monogrammed rivets on the steel hoops which Kristen wanted to pay tribute to, which led her to speaking to various distilleries to reuse their barrels to make the frames.

Each frame, available online, in various shops and distilleries including Glenfiddich, Isle of Arran and Bruchladdich, is also numbered so that customers can research which distillery or cooperage the barrel originates from.

After testing the product at various local markets, the company quickly grew from selling 200 in year one to over 20,000 from their new 3,000 sq. ft studio, featuring workshop space and drying kilns, in Rosewell Midlothian, which is expected to rise to over 35,000 in year three.

Being eco-conscious is at the forefront of the business model, not only using recycled wood but also reusing their waste wood to heat the wood drying kilns and workshops. The couple are also working on the sustainable development of the workshop including energy saving through solar panels, biomass, inverters and upgrades to workshop facilities.

Kristen said:  “We are delighted with the growth of Whisky Frames, which at the very early stages we had no idea would be this successful.

“We have a great team on board who have really helped drive the business forward and also received so much help from organisations like Business Gateway Midlothian, which has been instrumental in the expansion of our business.

“We realised early on that diversifying the product wasn’t the best plan and we decided then to stick to one product and do it well which has really paid off for us.  It’s great to have experts at Business Gateway who you can talk these big decisions through with and come out the other end with confidence and the skills to take the business to the next level doing what you do best.”

‘Whisky Frames has been an incredible success story and we have been delighted to support them and be part of their journey. The company ethos is embedded in repurposing and sustainability with the diversification to innovative new products.

“Their growth has demonstrated the markets for this – at home and abroad, and we are working closely with the company to achieve their global ambitions.”