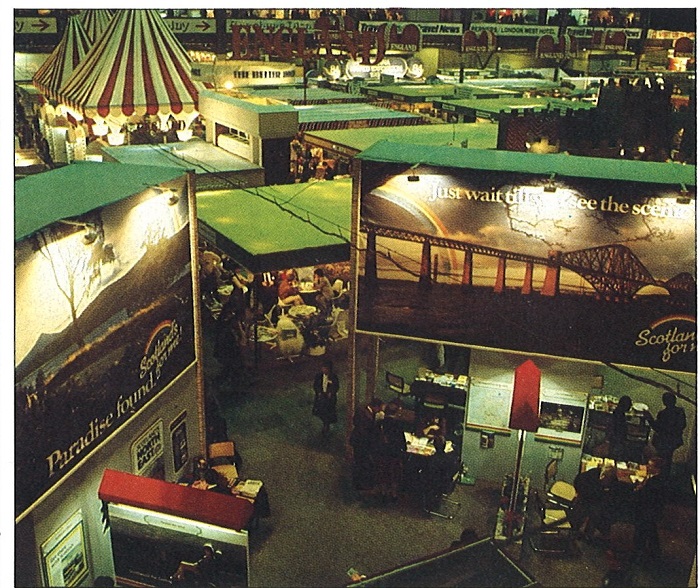 VisitScotland is marking its 50th anniversary with a host of Scottish businesses at the 40th World Travel Market (WTM).

The national tourism organisation has been attending the leading global event for the travel industry since it began in 1980 and almost 40 years later it is being joined at its stand by 18 different tourism companies.

Taking place at ExCel London from 4-6 November, more than 51,000 industry professionals are expected to attend WTM 2019. The event allows Scotland’s national tourism organisation and its industry partners to show travel trade professionals from around the globe exactly what the country has to offer.

These include first time exhibitors such as Johnstons of Elgin, VisitCairngorms, Cruise Loch Ness, and Luss Estates.

Family-owned Cruise Loch Ness is celebrating its busiest summer ever at WTM while returning exhibitor Blair Castle in Perthshire will be giving a sneak preview of their upcoming 2020 exhibition – The Jacobites: A Family Divided – featuring artefacts from the Battle of Culloden.

Meanwhile, Diageo is looking forward to the 200th anniversary of Johnnie Walker next year and the opening of the Johnnie Walker Home in Edinburgh as well as the Four Corners project which sees existing distilleries being upgraded as regional homes of Johnnie Walker. These include Cardhu in Speyside region, Glenkinchie in the Lowland region, Caol Ila in the Islay region and Clynelish in the Highland region.

LNER returns for the second time to the VisitScotland stand after launching their new Azuma trains this summer in Scotland which were built using Japanese bullet train technology and feature more seats which are designed to improve posture.

Tour company Rabbie’s and Glasgow Life are joining forces to launch new Celtic Connections Festival products for 2020. The world-renowned annual folk, roots and world music festival, sees 2,000 musicians from across the globe descend on Glasgow. As part of Rabbie’s suite of new travel trade packages, visitors can experience one of Celtic Connections’ flagship concerts at Glasgow’s Royal Concert Hall, as well as a hand-picked music event in one of the festival’s distinctive venues and entry to the unmissable Festival Club. There is also the opportunity to include one of Rabbie’s day tours to see more of Scotland.

VisitScotland is gearing up for the Year of Coasts and Waters in 2020. As well as the stunning scenery on offer, the ways in which Scotland’s coast and waters have shaped its history from the Industrial Revolution to the fishing and whisky industries can also be explored at a range of visitor attractions and these themes will be celebrated throughout the next year, along with a programme of events.

The national tourism organisation will also be promoting 2020’s VisitScotland Expo – Scotland’s biggest travel trade show – at WTM. Next year sees the event held at P&J Live – a brand new state of the art venue in Aberdeen – which aims to be the most sustainable in the UK – on April 1-2.

Malcolm Roughead, Chief Executive of VisitScotland, said: “The World Travel Market is an incredible event that provides a chance for Scotland to get in front of the global travel industry and show our worth. We have a very strong tourism offering and so it is important this is represented at WTM. It is great to have so many businesses with us on the VisitScotland stand.

“We have been attending this event since it began in 1980, which demonstrates our commitment to promoting Scotland to the travel trade across the world. It is with a sense of pride that we return this year during VisitScotland’s own 50th anniversary – a milestone which we celebrate with our industry colleagues and partners.

“Partnership and collaboration are at the heart of Scottish tourism and we work closely with communities and businesses to develop the rich assets, hidden gems and local stories of every region in Scotland.”

Businesses on the VisitScotland stand are: