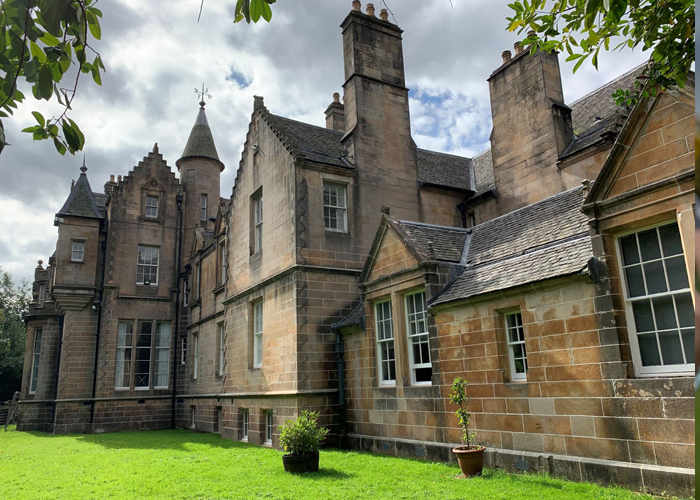 The Mansion House at Tollcross Park in Glasgow

THE Mansion House at Tollcross Park is coming back to life.

The jewel of the East End of Glasgow, which blazed with candlelight and rang to the music of waltzes and polkas in its Victorian heyday, is nearing the end of a detailed and sympathetic refurbishment which will return the voices and laughter of families to the house once again.

By November this year, 13 spectacular apartments will be brought to the market, some of palatial size, some with floor-to-ceiling shuttered windows and all retaining the characteristics, class and craftsmanship of the A-listed Scottish baronial masterpiece.

The restoration of the 174-year-old centrepiece of 80 undulating acres of parkland at Tollcross is already being spoken of in the same terms as the transformation of the Great Western Road mansion of art collector and Glasgow benefactor Sir William Burrell, which was effected by the same company, Spectrum Properties.

Bill Roddie, Managing Director of family-owned Spectrum Properties, said: “This magnificent building is of massive historical importance to the East End – it is part of its heritage – and the work carried out had to be commensurate with its grandeur.”

“The highly skilled team has, in effect, been paying its respects to the building while refurbishing windows and doors, replacing sills and seals, rewiring, installing energy efficiency measures, bringing the roof up to scratch and repointing the entire building.”

“The tenants of the new flats will have the whole park on their doorstep, but importantly they will also have a private garden to the back and the side of the building and a barbecue area for summer nights.”

The architecturally stunning development is the latest sign of the commitment to the area of Spectrum Properties, which has already contributed hugely to the preservation and enhancement of some of the East End’s most outstanding buildings. Remarkably, the project is being progressed with no grant funding, or any requests being made for such funding.

The company, which operates all over Glasgow, Edinburgh and Stirlingshire, is spending more than £1 million on the conversion of the Mansion House, which was built by the architect David Bryce for the mine-owning Dunlop family and features classic crow-stepped gables, corbelled turrets and pointed roofs.

The new homes will have ultra-fast broadband and will be served by a private road sweeping through the park, with its mature trees, dramatic ravine, internationally-famous Rose Garden and the classical Winter Gardens – which are just a short stroll away and which are themselves undergoing a £1 million+ restoration.

Spectrum Properties has been instrumental in saving much of Glasgow’s Victorian architectural and industrial heritage and has invested tens of millions of pounds in creatively repurposing properties of recognised architectural merit.

Although Spectrum Properties has moved into residential development in the last 10 years, its primary focus remains on commercial property. It owns some 700 commercial properties across the city, comprising 70% of its group holdings.