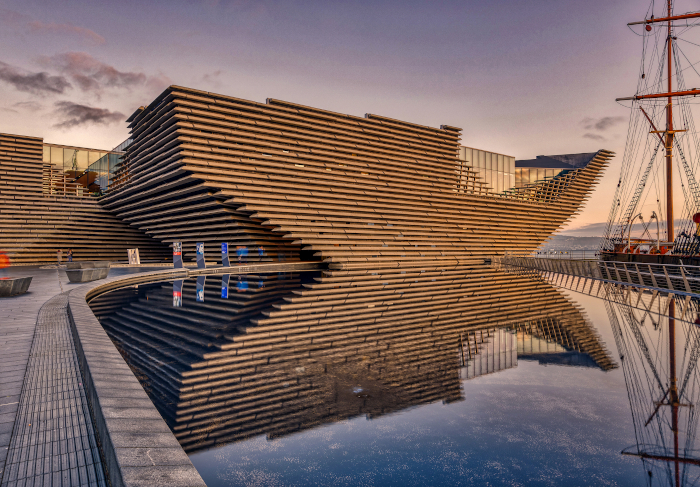 V&A DUNDEE had a £75 million economic impact across Scotland in its first year after opening, according to new independent research.

The study found that visitors to the museum were worth £21 million to the Dundee economy and £75 million to the overall Scottish economy in the 12 months from 15 September 2018, when the new design museum first opened its doors.

This far exceeds the predicted impacts of £10 million in Dundee and £23 million across Scotland, boosted both by a significant increase in visitor numbers – 833,015 compared to a predicted 500,000 – and a higher proportion of overseas visitors on longer trips around Scotland.

The independent study, conducted by Ekosgen and Reference Economic Consultants and commissioned by V&A Dundee, also found that the museum supported the equivalent of 696 jobs in Dundee and 2,143 across Scotland. An estimated additional 370 jobs have been created in Dundee by the museum opening.

In addition, the construction of Kengo Kuma’s ground-breaking building had a further economic impact of £70 million across Scotland, helping to support 7,037 jobs.

Philip Long, Director of V&A Dundee, said: “This new research shows very powerfully how V&A Dundee has had wide economic benefits, within our own city and across the whole country.

“It demonstrates the value of investing in world-class cultural centres like V&A Dundee to boost tourism and create jobs, as well as the essential contribution the museum is making as a cultural institution promoting design creativity.

”V&A Dundee has a hugely exciting programme ahead, including our major exhibitions Mary Quant and Night Fever opening later this year, which will continue to draw visitors to the museum, to Dundee and to Scotland.”

Tourism in Dundee is now worth over £10 million a month to the city, according to research commissioned by Dundee City Council, with the first six months of 2019 seeing a 19.4% boost to visitor numbers.

Culture Secretary Fiona Hyslop said: “V&A Dundee is a powerful symbol of Dundee’s new confidence and the strong future of design and innovation across our nation.

“In its first year it has far exceeded expectations for visitor numbers and proved an incredible success in boosting Scotland’s attractiveness to those looking for world-class cultural experiences.

“The Scottish Government provided £38 million towards the construction of the building and committed extra funding to support its first ten years of activity. It has more than proved its cultural value and I welcome this report in highlighting the economic value of this flagship museum.”

Pamela Reid, Director of Ekosgen, said: “V&A Dundee has had a remarkable performance in its first year, far exceeding its estimated visitor numbers and generating a much larger economic impact for Dundee and Scotland as a result. This achievement should not be understated.

“The museum has attracted new first-time visitors to the city, many of whom would not have visited Dundee without it. There is also evidence that a substantial proportion of people who have visited V&A Dundee are likely to return, which is extremely positive and an important indicator of sustainability.”

Councillor John Alexander, Leader of Dundee City Council, said: “I am delighted that this research confirms the positive impact V&A Dundee has made for the city and Scotland.

“Our stunning museum is now very firmly part of the cultural fabric of the city, with its design galleries and exhibition programme attracting locals and visitors alike in their hundreds of thousands.

“It has raised Dundee’s international profile and played a key part in record-breaking tourism figures. V&A Dundee is helping to create jobs and new economic opportunities for the city and the Tay Cities area.”

Tim Allan, Chair of V&A Dundee’s Board, said: “These economic impact figures are exceptional, and clearly show the huge impact that V&A Dundee has already had within its home city and right across Scotland.

“The museum is driving business confidence within Dundee and developing the city as an international tourism destination, both of which will develop in the coming years as everyone in the city continues working together to make this impact felt by all of our communities.”

V&A Dundee is currently showing Hello, Robot. Design Between Human and Machine until 9 February 2020, a ground-breaking exhibition challenging our assumptions about robots and investigating how they are shaping the world we live in. The exhibition has never been shown in the UK before.

This will be followed by its first major fashion exhibition, Mary Quant, from 4 April 2020 and Night Fever: Designing Club Culture from 31 October 2020, another UK-first exhibition.

The museum was officially opened by The Duke and Duchess of Cambridge in January 2019.