US accolade for landmark Scottish attractions 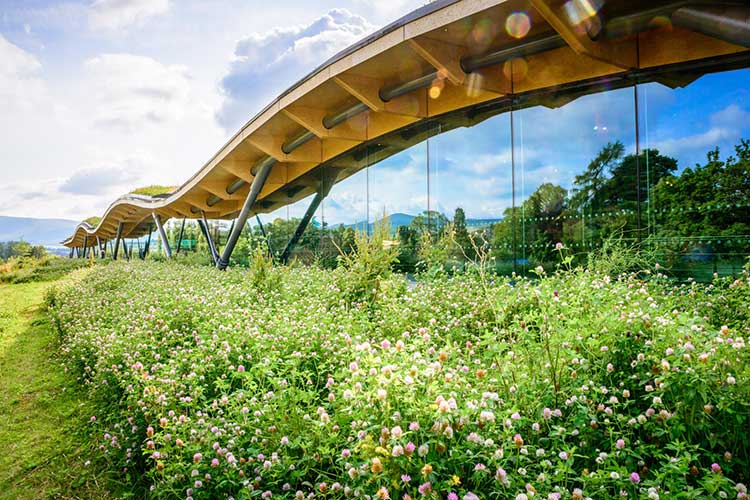 Two of Scotland’s premier visitor attractions have been named as must-see destinations for international travellers to visit this year.

American news magazine, TIME, one of the most respected and informative guides to the world’s events, and famous for its iconic front cover images, has revealed that V&A Dundee and The Macallan Distillery have been listed as two of ‘The World’s Greatest Places 2019’.

Part of a selected 100 global destinations to see right now, the two Scottish attractions are joined by the University Arms Cambridge, Cambridge as the only three locations to be listed in the UK.

V&A Dundee, an international centre for design for Scotland, was opened in September 2018, and has already attracted more than 750,000 people. Around a quarter of these visitors were reported to have come from the rest of the UK or overseas.

The first ever design museum to be built in the UK outside London, it was designed by internationally acclaimed Japanese architect Kengo Kuma and stands at the centre of a £1 billion transformation of Dundee’s waterfront. V&A Dundee has been credited with driving visitor numbers and spend to the city according the figures released by Dundee City Council earlier this year.  Tourists contributed £187 million to the local economy in 2018, an increase of £16m on the previous 12 months, with the number of day visitors to Dundee increasing by 36 per cent to 560,000 in the same period.

Opened in 2018, The Macallan Distillery Experience in Speyside, is the first distillery developed by internationally renowned architects, Rogers, Stirk, Harbour + Partners and has already received a number of accolades for its innovative design. Echoing the beautiful countryside setting, the building’s rolling roof serves to conceal its ingenious fusion of architecture, whisky technology and an engaging experience that encapsulates the heritage and innovation of The Macallan.

Welcoming visitors from all across the globe, The Macallan has helped Speyside – a region with the highest concentration of whisky distilleries in the world and home to the world-famous Malt Whisky Trail – to further capture the global interest in whisky, a sector worth £3.3 billion to the UK economy.

In response to the inclusion of both attractions being included in ‘The World’s Greatest Places 2019, Tourism Secretary Fiona Hyslop said: “This is a fantastic achievement for both the V&A Dundee and The Macallan Distillery. Both attractions represent the very best of Scotland’s tourism experience.

“The city of Dundee has seen enormous benefit from the opening of the world class V&A museum. Since it opened, the museum has attracted more than half a million visitors from all over the UK and throughout the world, and has been part of the rejuvenation of the waterfront in Dundee.

“Whisky tourism continues to grow and last year visitor numbers to distilleries hit 2 million for the first time ever. The Macallan Distillery is an architectural wonder and in its innovative telling of the story of whisky is helping to lead whisky tourism.”

Malcolm Roughead, VisitScotland Chief Executive, said: “The Macallan Distillery and V&A Dundee’s inclusion in this prestigious list of the top 100 places to see in the world this year is testament to both attractions’ stature in the UK.  I don’t think anyone could go to either location and not stand back in awe at these amazing feats of architecture, bringing their surroundings to life, as well as be drawn in to the experiences they offer visitors.

“Both attractions have been ground-breaking for their respective city and region. They have forged reputations for innovation, creativity, learning, community engagement and unforgettable experiences, helping to elevate the unique characters of both Dundee and Moray Speyside, and of Scotland, and put them in the map as a must-see places to visit.

“We can’t be complacent however and it is important that we continue to encourage the tourism industry to provide world-class service, facilities, events and attractions to keep up with ever-changing consumer demands and ensure visitors continue to have memorable experiences across Scotland.”

Laurie Piper of Moray Speyside Tourism, the Destination Marketing Organisation for Malt Whisky Country said: “News that the new Macallan Distillery has reached Time Magazine’s 2019 World’s Greatest Places list is no surprise to us here in Moray Speyside – we’ve seen the effect it’s already had on tourism in the area, and as the true home of malt whisky, it can only be a good thing for the region’s tourism industry that such a fantastic, inspirational and innovative building at the heart of Speyside is recognised at worldwide level.”

Dundee City Council leader Councillor John Alexander said: “This is another exciting accolade for V&A Dundee and yet more recognition that Dundee is a thriving and exciting city. We have built an international reputation as a creative centre with arts and culture as a driving force in our ongoing transformation.

“The opening of V&A Dundee was a pivotal moment in this journey. I am pleased to see that hundreds of thousands of people have visited so far, far exceeding expectations. I hope that TIME Magazine’s award will help attract even more visitors to our city.”