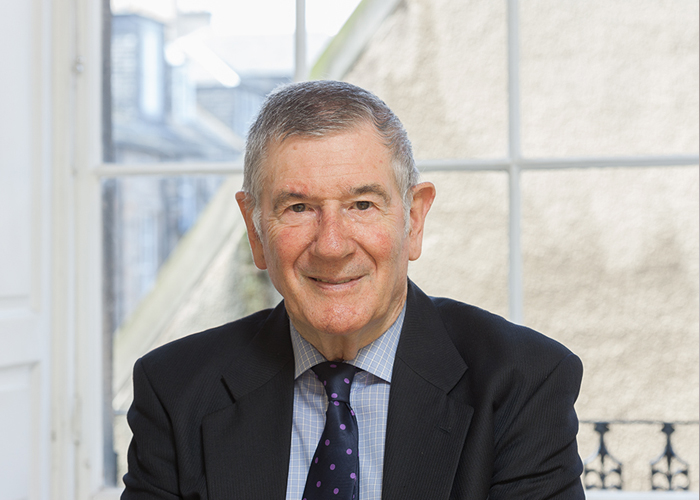 TRIBUTES have been paid to Ian Balfour, a scion of the Edinburgh law firm, Balfour + Manson, who has died aged 89. Mr Balfour, whose grandfather cofounded the firm in 1887, remained active after retiring as Senior Partner with Balfour + Manson in 1998 and, until late last year, was working as joint auditor for Edinburgh Sheriff Court.

Ian Balfour was born in Edinburgh in 1932. He started his education at Edinburgh Academy in 1938, but was evacuated during the war to Hamilton, Ontario, Canada, with his mother and his brother William where they lived with family.

On his return, Ian completed his education at Edinburgh Academy. He went on to Edinburgh University, graduating with an MA in 1953 and LLB in 1955. In those days, an apprenticeship was served alongside obtaining a law degree. Ian began his training in Balfour+Manson in 1952 – during the last year of his MA, qualifying as a lawyer in 1955, becoming a partner in 1958.

He then spent over 40 years in general legal practice before his retirement in 1997 although he remained a much-valued ‘wise counsel’ to those in the firm well into his eighties.

Elaine Motion, Chairman of Balfour + Manson, paid tribute to Mr Balfour, describing him as ‘a phenomenally knowledgeable and talented lawyer’ throughout his lengthy and distinguished career, carrying a family legacy that stretched back to the firm’s origins in 1889.

“Ian will be sadly missed by Partners and staff, past and present. Through both his professional and social life he was a great friend to so many and on a personal level, I will always appreciate the opportunity and guidance Ian offered me. He was a quiet man of real stature and gravitas whose talents extended well beyond the law-one example being his historical narrative about the firm and those who have passed through it over the decades). He visited the office regularly until late last year when he retired as a sheriff court auditor.”

“Everyone connected with Balfour + Manson will continue to honour this fine man by continuing the legacy that he and his family brought to legal practice in Edinburgh.”

Ian was an innovative manager, streamlining many aspects of Balfour+Manson’s business activities. He arranged upskilling of staff to carry out many new roles interfacing with clients. He was an early organiser of the firm into specialisations.

One key innovation was to engage four apprentices each year, and later trainees when the training system changed. A number of Court of Session Judges, Sheriffs, Procurators Fiscal, and Defence Counsel were trainees in Balfour & Manson under his tutelage.

His managerial vision even extended to the introduction of computers – early for a legal firm – in 1983 and his knowledge of that area was seriously impressive.

A man of devout faith, Mr Balfour had considered becoming a lay preacher and studied for a Degree in Divinity from the University of London, graduating in 1959. He was a member of Charlotte Baptist Chapel in Rose Street, Edinburgh from 1963 where he later became Secretary to the Chapel, retiring from the role in 2000.  The chapel had one of the largest congregations in Edinburgh, regularly filled to its capacity of 1,000 on Sunday mornings.

Mr Balfour accepted an invitation to be president of the Baptist Union of Scotland for the year 1977-78.  This again stimulated his academic interest in theology, and he attended New College Edinburgh where he obtained a PhD in Theology in 1980, after studying the life of one of the Christian Church’s fathers, Tertullian, who was a Roman convert to Christianity.

He was also appointed a Fiscal to the Royal College of Nursing, which dealt with nursing discipline as well as being appointed Fiscal to the Law Society of Scotland on disciplinary matters. He was also Secretary to the SSC Society and a Tribunal Chairman for Child Support.

Ian spent many years writing historical records of his family, a whole book about Charlotte Chapel, a history of Balfour & Manson as mentioned above as well as many other topics which were of historical or entertaining interest to him.

Ian Balfour is survived by his wife of 64 years, Joyce Pryde, and their four children a daughter and 3 sons, 10 grandchildren and 3 great grandchildren. Lesley, his daughter is a retired midwife, Robin is a doctor, Jeremy is an MSP and Sandy is a Chartered Surveyor.