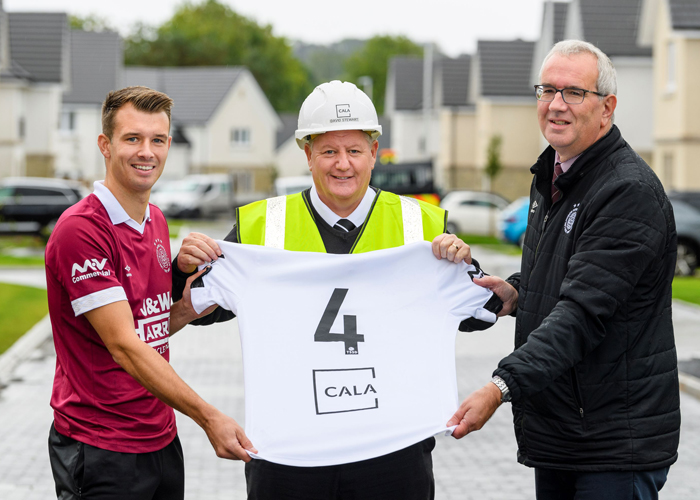 Linlithgow Rose FC players will wear the Cala Homes (East) logo on their home and away kits this season as the developer becomes its latest sponsor, supporting the teams push towards promotion to the Lowland League and further trophy success.

With work underway on Cala’s fourth Linlithgow development in recent times, the backing will support the Rose’s in their 2022-23 East of Scotland League campaign.

The West Lothian team is looking to build on the success of last season in which the club won two cup trophies – the first items of silverware since 2013.

“When we started the conversations with Cala about the potential of sponsorship, we were certain the partnership would work well for all parties and we’re excited to work together.”

As well as featuring on the Team’s playing kits, there will be Cala branding around the Club’s prestigious MV Prestonfield Commerical Stadium.

President at Linlithgow Rose FC, Jon Mahoney said: “It is an excellent time to be involved in Linlithgow Rose and we’re very glad to welcome Cala Homes in becoming part of the team. Cala consistently strives to be the best it can be and that is something we always work towards at Linlithgow.

“The support will be extremely valuable for the in helping us achieve our aspirations for the club but it was mainly about finding a partnership that fitted well with the Linlithgow Rose values and we’re confident we have that with our new sponsors.”

If successful, the part-time West Lothian club will be promoted to the Lowland League, which acts as a feeder league for clubs to enter into the Scottish Premiership Football League system.

Philip Hogg, Sales and Marketing Director at Cala Homes (East) said: “Linlithgow Rose FC are achieving excellent things on and off the pitch and it was important for us at Cala Homes (East) to play a small part in that. We’re looking forward to supporting the club, getting more people down to games and getting behind Linlithgow in what is sure to be an exciting season.

“With another development now underway in Linlithgow, Cala has always had a close affinity with the area and the excellent communities within it – so it was important for us to do what we can to support and partner with a brilliant local group like Linlithgow Rose.”

The latest Linlithgow development in the making – Preston Glade – follows on from the final reservation at Cala’s nearby Queenswood development to the east of Linlithgow and will include a mix of one to five-bedroom homes, including cottage flats, bungalows, terraced homes and detached properties.