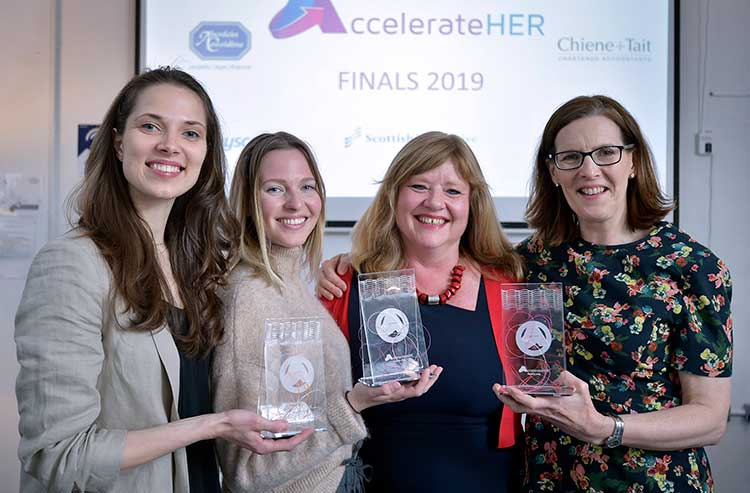 A group of Scottish-based female business founders are celebrating after winning top honours at this year AccelerateHER Awards.

Rachel Jones of SnapDragon; Lina Gasiunaite of Biotangents; and Corien Staels of Staels Design were winners of the 2019 awards which recognise female business founders in a leading role within companies with strong global growth potential.

The winners were announced at an event staged at Barclay’s Eagle Lab within Edinburgh’s Codebase emerging from a field of 68 applicants. The three entrepreneurs secure a free place on trade missions to Dubai and Berlin where they have the opportunity to showcase their business and meet key industry contacts and investors.

Rachel Jones is founder and Head Dragon at Edinburgh-based SnapDragon Monitoring, a business that fights fakes by monitoring on-line markets for IP infringements. The company has raised significant external finance and increased its staff from four to 26 people in the last year. The panel of judges praised her ‘absolute drive’ in growing the business and were impressed by SnapDragon’s 98 per cent success rate in delivering for its clients.

A founder and director of Biotangents, Lina Gasiunaite is one of the key people behind the company which has created low cost infectious disease diagnostic technology system for farming livestock. Targeting a global market worth $2.6m, Biotangents aims to expand its technology offering to diagnosing infectious diseases in domestic pets and, potentially, within humans. Earlier this week the Midlothian-based company secured £1.5m of new investment through its second round of fundraising which included finance from Investing Women.

Stael Design, creators of Wheel Air, an air filtration system for wheelchair users, was founded by its Managing Director Corien Staels. The Glasgow-based company is targeting its internationally patented product offering at a significant proportion of the world’s 150 million wheelchair users. The AccelerateHER judges commended Corien as an ‘impressive founder’ who has attracted international level board members to support her ambitious growth plans.

Jackie Waring, CEO of Investing Women which runs the AccelerateHER Awards programme, said: “I would like to congratulate this year’s winners who have succeeded within a very competitive field where we had our highest-ever number of applicants for scalable international businesses.

“Our winners are dynamic females who play a key leadership role in innovative companies with huge global growth investment potential. The forthcoming trade missions to Berlin and Dubai, where they have secured complimentary places, will help them in achieving that aim.

“We continue to see a significant impact from the AccelerateHER Awards with finalists from the four years we’ve run the competition securing more than £11m of investment since getting involved in the programme.”