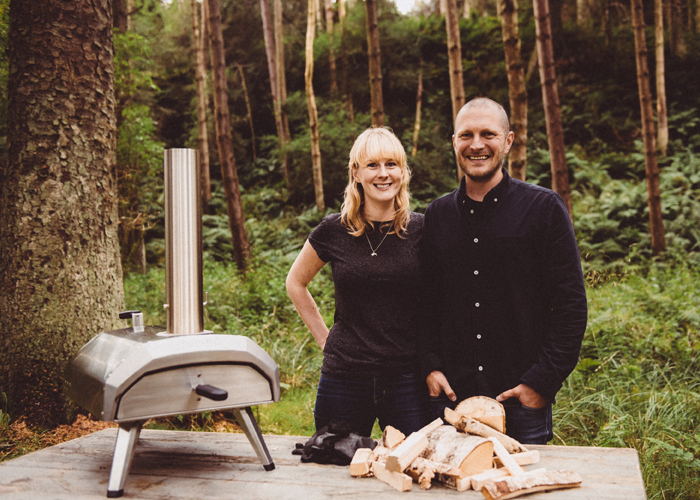 PIZZA oven maker Ooni is the fastest-growing private company in Scotland, according to the inaugural Sunday Times 100 rankings, published today online at sundaytimes.co.uk/100 and available as a supplement with the print edition of the newspaper this Sunday, 3rd July. The new annual rankings identifies and celebrates Britain’s 100 leading entrepreneurial businesses, and showcases the people behind the UK’s most dynamic private companies.

Husband and wife team, Kristian Tapaninaho and Darina Garland, run their company Ooni from a base in Broxburn near Edinburgh. Kristian used to enjoy making his own pizza after finishing work on a Friday. However, one thing stopped him creating the perfect pepperoni: his oven wasn’t hot enough.

Therefore, they founded the business in 2012 and started to sell their own portable pizza ovens that reach 500˚C. Last year they made an incredible £208 million in sales, an amazing 175% a year increase in the last three years, and they employ 300 people.

The other company in the UK list from Scotland is Beer52, based in Edinburgh and co-founded by Fraser Doherty and James Brown. Sales rocketed during the pandemic as pubs closed and more consumers sought out alternatives online.

The research for the Sunday Times 100 found on average the top 100 fastest-growing companies have increased their sales by 91 per cent a year over the last three years to a combined £4.7 billion in sales.

Over 13,000 new jobs have been created by the top 10o fastest-growing companies in the last three years, with each business creating an average of 130 new roles. In total these companies employ 20,746 people.

Out of the 100 companies featured in the ranking only approximately a third (36) are based in London, with the rest spread through-out the country. This includes 16 in the north west of England, 10 in the south east, and another 7 in Yorkshire and the Humber.

Ben Francis, chief executive and co-founder of Gymshark, who writes this weekend of his positive experience of achieving the top spot on previous rankings, said:

“One of our milestones was topping the ranking in 2016 so huge congratulations to all those on this year’s Sunday Times 100. I can’t wait to see what they all do next.”

“The Sunday Times 100 is our new-look annual celebration of the UK’s entrepreneurial achievements. The founders of these exciting businesses are vital job creators and innovators. The top 100 have all performed exceptionally during the pandemic and show how some companies used the change to consumer and work habits to their advantage.”

The Sunday Times 100 forms part of The Times Enterprise Network, a cross-platform network staffed by reporters from The Times and The Sunday Times, which was launched last year to help provide advice, inspire and inform established business leaders and aspiring entrepreneurs.