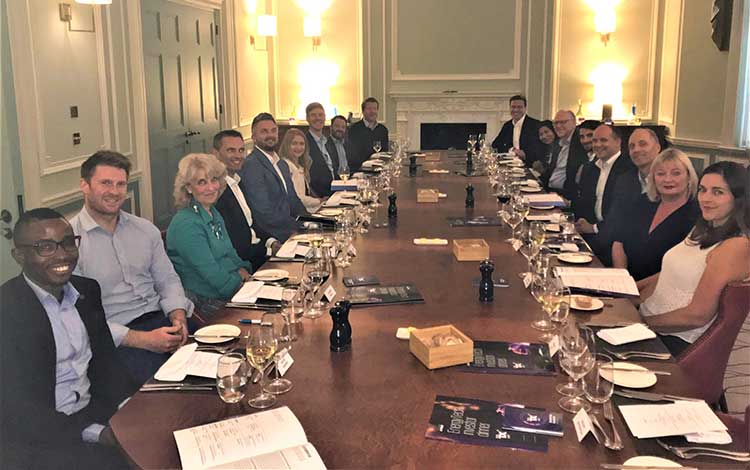 Technology and innovation must be at the heart of Scotland’s oil and gas sector, to ensure its long term future, according to industry entrepreneurs.

A group of CEOs from pioneering new energy businesses have gathered in London to secure potential future funding and work together to shape a new tech-focused direction for the country’s most important sector.

Organised by KPMG and the Oil and Gas Technology Centre, founders and CEOs from five North East companies, who are part of the TechX Accelerator programme, travelled to London to meet potential venture capital investors and share insight and views on how technology could be at the heart of future growth.

Launched in December 2017, the TechX programme provides expertise and assistance, both as a technology accelerator and incubator for start-ups and fast-growing SMEs looking to enter or grow within the oil and gas industry. As a key partner, KPMG works closely with the individual businesses, offering expert support and hands-on advice in areas including accessing funding, R&D support and scaling-up.

“We have a very active capital market in Scotland, but that’s predominantly focused in Edinburgh and Glasgow, so from the North East of Scotland, in Aberdeen, where we’re based, it’s particularly difficult to engage and raise early stage seed capital, so we’re trying to broaden our network as wide as possible. In London there’s a huge amount of capital on offer. There are a lot of investors in the city, particularly in the energy and clean tech sector, so to be able to break into that network and have a meeting such as this, with quite a diverse group of investors, is really important for the start-ups, enabling them to build that network themselves.

“There’s been a huge amount of efficiency gained over the last four years, as part of the downturn, with companies trying to get a lot leaner and more efficient in the way that they run their businesses, but they get to a point where they really need to look at new technology and innovation to deliver the step change that we really need in this industry, so the centre has been established in Aberdeen to really support that with government funding to identify exciting technologies, both early stage, at the start-up, and even the R&D stage, as well as the more mature companies looking for final field trials. We know and recognise a lot of the technology that we will need to be successful, and to sustain the industry in the UK will come from start-ups, so we need to have a much more diverse, supportive offering that really breaks down this potential 16 year roadmap that we’ve had traditionally for technologies to break into the industry. We really want to turn that on its head, and give these start-ups the best chance of success, to commercialise their technology, and help make a difference.”

Rotimi Alabi, Founder & CEO of RAB Microfluidics, attended the event. The entrepreneur’s business has developed a pioneering technique which could enable oil samples from heavy machinery to be analysed on-site, rather than being shipped to onshore laboratories for analysis. Rotimi said:

“The oil and gas industry is facing competition from a number of places. You have new energy forms coming in place, including renewables such as solar and wind, and you also have new technology, like battery power. With all of these new developments in technology and a changing energy mix, the oil and gas industry can no longer rest on its laurels, if it wants to retain its competitiveness within the energy space.

“To really adapt and identify itself with these new forms of energy, it has to work more collaboratively with entrepreneurs, and fully adopt new technology to enable it to optimise its processes and attain efficiency in its procedures.”

The gathering in London comes as activity and confidence within the oil and gas industry appears to be slowly returning to pre-downturn levels. The latest Oil and Gas survey, conducted by Aberdeen & Grampian Chamber of Commerce, in partnership with the Fraser of Allander Institute and KPMG, revealed more than 45% of contractors have increased investment spend in the UKCS in the last year, while almost half (47%) are now planning to use technology including artificial intelligence in their growth strategy over the next five years.

“There’s definitely optimism. The optimism has been there for a while, but what we haven’t seen is that translating into profits and an improvement in results. That is slowly starting to change now, and people are talking about 2020 being a much better year. What the downturn has brought about is a radical change in thinking, and a lot more innovative behaviours. We’ve seen more collaboration happening across the operators, and that’s a really positive step.

“At times, it can take a real challenge to a sector, to force businesses to address chronic challenges, and work more closely together to overcome the obstacles. The worst of the difficult times appears to be over and our TechX entrepreneurs are a great example of the pioneering new approaches and shining lights that can emerge from a particularly dark period.”

“The oil and gas industry does have a real entrepreneurial edge to it, but a great deal of that innovative behaviour has historically taken place within companies. Now, following the downturn, with many people out of work, there has been a real change, supported by agencies and bodies like The Oil and Gas Technology Centre, who’ve really invested in capturing that innovative spirit.

“Some of the technologies we’re now seeing coming on-board have been driven by developments within businesses who’ve begun to sell ideas and new concepts into the marketplace. One of the few good things about a downturn, has been cash-poor companies realising that they need to find new ways of working and embrace innovation, to drive down costs, and increase efficiencies. That’s quite a fundamental change in behaviour, and there is still some nervousness in the sector, but I’ve definitely witnessed an upward shift in activity over the last six to twelve months. There definitely seems to be more momentum, more optimism and more activity, with greater return on that activity.”