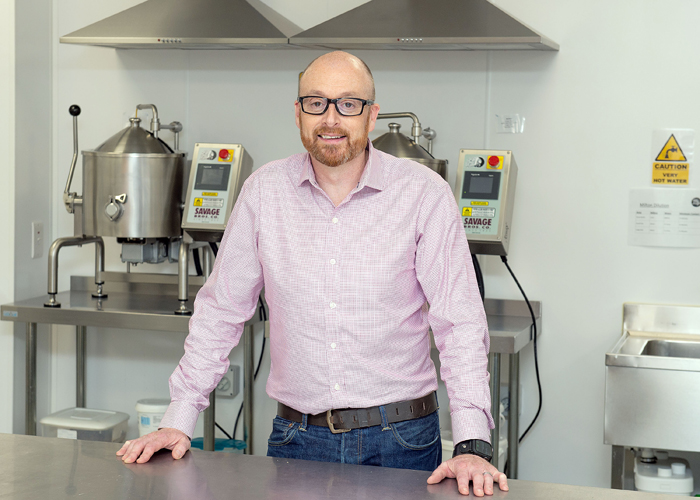 A CLACKMANNANSHIRE businessman says he’s expecting a growth in turnover of £1.5 million in three years thanks to a business growth scheme delivered by the University of Stirling Management School.

Graeme Clark, managing director of food and drinks sales consultancy Scot Serve Ltd, says that he can now take his £2.5m business to £4m by 2025 using what he has learned in the Help to Grow: Management course.

Mr Clark, 52, who has run the business with his wife Helen since 1996, said: “I didn’t think we’d get to £3m in three years, to be honest. I felt like we were ahead of the curve, but had limited scope on where else to go. Now, I’m spending the next three to four months restructuring according to what I’ve learned, which has been a revelation.”

Help to Grow: Management trains managers across the UK to help small and medium-sized businesses develop growth strategies and improve performance. The 12-week programme is 90 per cent funded by the UK Government, and costs just £750 to participants. Stirling Management School, supported by chartered accountants and business advisers Johnston Carmichael, is one of four Scottish institutions offering the programme.

Mr Clark took part in a mixture of in-person and online lectures, seminars, and workshops with 16 others from a wide range of Scottish businesses between September 2021 and January 2022.

He said: “I heard about the course through someone I know and I thought, ‘At 52, what do I have to learn?’ At the same time, I was feeling like I was losing track of the business a bit. We were growing, but everything was coming through me, and it was hard to see how we could expand. So, I thought, why not, if I learn one thing that’ll be grand. Now I would say to people, if you have an open attitude, this will be the best £750 you ever spend!”

He is now in the process of overhauling his business in four ways, based on what he learned.

He said: “The first thing is digitisation. Part of the course was a scorecard for how business-ready we were, and actually we were quite far along. It was a rubber stamp for our platform, but also allowed me to see how we might develop it, to bring in more automation for example.”

“The second revelation was employee engagement. I had always been the one to have the ideas, and then we’d implement them. Our problems were mine, too. But I realised from the course that I wasn’t sharing anything with my team – not accounts, or turnover – so it was difficult for them to add value. Now, I’ve brought them in – we’re on our third strategy day, and they are bringing new insights and ideas.”

“We’ve now come up with our mission, vision and values, which has been really useful for defining what we’re about. Now if I’m recruiting, I’ll be looking at values too, because a business is all about the people.”

“That has led to us changing our marketing strategy, so that we’re talking about the benefits we deliver, rather than what we do. And because we have the data to show it, we’re building that in so we can demonstrate those benefits to the brands we want to work with.”

“I’m spending the next three to four months pulling it all together and then, after 16 years, I’ll be pressing the button on ‘year one’ of taking the business to another level!”

Although he finished the course in January, he is still in touch with the rest of his cohort.

“Another real value of the course has been networking,” he said. “As well as having access to the best academics, with mentoring continuing past the end of the course, we were a group from different business backgrounds, and that’s really valuable. We know about everything from diggers and drills, to needles and threads, to lager and sweets. We’ve got a WhatsApp group now and, although we’re all really busy, if anyone’s stuck, we post on there and get an answer straight away. We’ve built a community.”

Find out more about Help to Grow: Management on the Small Business Charter website