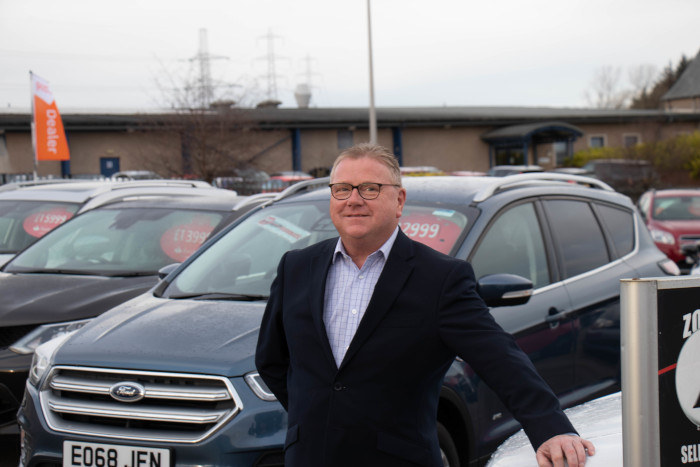 VETERAN businessman and motor trade expert, Steve Innes, is gearing up for greater heights in 2020 as he looks to build upon the company’s four decades of success.

I&K Motors is known throughout the North-East for its high-quality service and a customer-orientated approach to car sales. But Steve Innes, the Managing Director, who has been at the helm of the company since its creation, is just as well-known for his honest work ethic and down-to-earth method of business.

A passionate musician, Steve realised he had a natural gift for salesmanship when he was hired to provide backing music for an event at Henly’s Cars in Aberdeen, who were launching a new model of Talbot Solara. Steve had taken six keyboards along to the event, and by the end of the night had sold more keyboards than they had sold cars! The following day, the general manager at Henly’s offered Steve a job.

Three years later, Steve founded I&K Motors with his brother in law Jim King, who was working as a mechanic at the time. Things started out slowly, as they operated out of a small building in Old Rayne, north of Inverurie, with just a handful of cars for sale. However, Steve’s natural talent and drive quickly meant that they were expanding and moved into Inverurie. Not long after the move Steve and Jim amicably parted ways leaving Steve as the sole proprietor of I&K.

Branching out and running the business on his own, Steve was never one to shy away from risks. Where other’s saw threats, he would see an opportunity.  One on occasion in the early 2000’s, Steve was presented with a chance to purchase 75 of the same model of VW Passat in one go. Despite over half the vehicles being the same colour, Steve leaped at the chance to get them lined up on the I&K sales lot. Knowing that the sight of 75 identical cars would generate a huge buzz, Steve’s gamble paid off as word-of-mouth marketing took effect and the vehicles sold.

As well as his ability to grab an opportunity with both hands, a critical aspect of Steve, and therefore, I&K Motor’s success, is his commitment to going the extra mile for the customer. Steve commented:

“Ultimately, it’s all about giving the customer a good deal, and letting them know that they can always count on us to come through for them. Our interest in the customer doesn’t end when they purchase a vehicle, we make sure they get good service afterwards.”

Recalling one particularly memorable example, Steve went on to add:

“Some years back, on Christmas morning, a local vet who had purchased a car with us, was on duty and needed to get to his practice but couldn’t because his engine wouldn’t start. Normally we would have immediately taken his car to be repaired and supplied him with a courtesy car, but it being Christmas morning this was made slightly more complicated.”

“I took him down to the garage, unlocked the gates, and cleared the snow off a courtesy car that he could use until we could get his fixed. That’s the kind of touches I would never ask my employees to do, it would have been easy to phone my most willing service manager, but I would never dream of doing that on Christmas Morning. I still smile fondly looking back at that day.”

This commitment to customers extends to the wider community at large, with Steve always making the effort to give back and ensure that Inverurie shares in I&K’s success.

“In Inverurie there is a particularly strong sense of community. Even though it’s expanded considerably, that sense of cohesion is still there, and we love to be a part of that.”

“Every year we try and do what we can to give something back. On the 35th anniversary of I&K, we raised over £60,000 for CLAN. We’ll have to do something major for our 40th, but in the interim, we always do something too. Just last year on August 30th, we organised a ball at Meldrum house and raised over £26,000 for Macmillan Cancer Support.”

“We support local football teams and local sports in general, but I can’t take sole credit for what we do, without the support of my family, friends, the business, and the people in and around the town it wouldn’t be possible.”

Looking to the future, Steve shows no signs of slowing down having recently entered the property development sector and is near completion of a new build facility for international supplier screw fix, with a number of other projects in the pipeline.

“I’m optimistic about the future and as enthusiastic as ever about I&K Motors. I’m excited to see what this new decade brings for me, my business and the North-East as a whole.”

I&K Motors are located in the Highclere Business Park in Inverurie and there website can be found here: https://www.iandkmotors.co.uk/