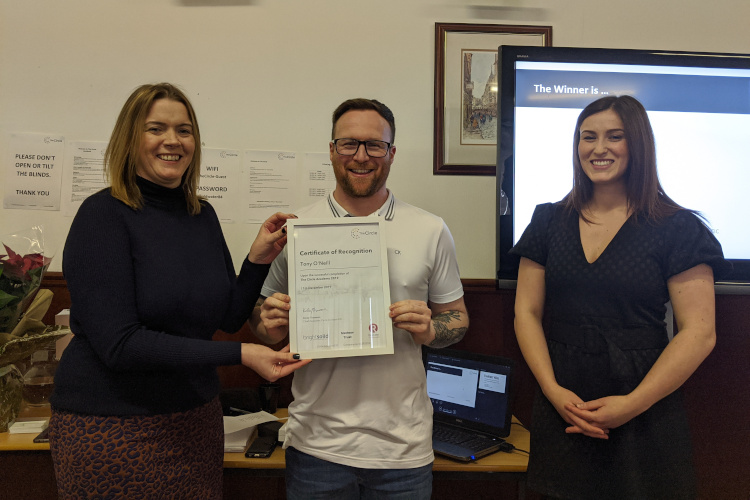 A GROUP of Scottish social entrepreneurs took part in a pitch competition following their completion of a new 12-week ‘More Than Profit’ training programme, The Circle Academy. The Circle Academy – the first of its kind in Scotland – was launched by Dundee-based social enterprise The Circle.

The training programme was created to provide people with knowledge and tools to build sustainable ‘More Than Profit’ businesses. The candidates attended expert speaker sessions which covered topics including mindset, governance, business planning and social impact, as well as taking part in tasks to generate income. Throughout the course the candidates were also supported to work on aspects of their business including a business plan and a marketing strategy.

The Circle Academy was run by Academy Manager, Kara Swankie, a former Commonwealth power-lifting gold medallist who at just 24 has already set up and sold two businesses. Coming from a commercial background, Kara already had instilled within her a drive to focus on profit and financial sustainability which is a quality that The Circle wanted to foster in the candidates who joined the Academy. The Circle launched the Academy with an aim to ensure that the organisations being set up and developed by the candidates on the programme would be sustainable in the long term.

In her role as Academy Manager Kara has worked closely with the candidates and has been able to see each of them develop throughout the programme,

“The transformation that I’ve seen with the candidates has been phenomenal. Many of the candidates began the course with most of their focus on their social impact over financial sustainability. To see them then be able to pitch their plans with an emphasis on how they can make their organisation sustainable was amazing; it was a very proud moment for me. I’m excited for the journey to continue with cohort 2 in 2020.”

Following their completion of The Circle Academy programme, the candidates then delivered a pitch of their plans for their business and where they see it going in the future. They gave their pitches at a public event where the audience were then invited to vote for the two pitches that they thought were the best. The two candidates who received the most votes were then awarded the money that the groups had brought in through the income generating tasks which they took part in on the course. The two candidates who won this were John Alexander, Managing Director of Alexander Decorators who is planning to set up a social enterprise to train young people in the trades and Tony O’Neill who is founder of Animalia Apparel and Animalia CIC.

Following his father’s death at just 53 years old, Tony decided to set up a fitness boot camp which evolved into Animalia Apparel, a sportswear brand which supports young athletes by supplying them with their kit and giving guidance during the early stages of their careers. He has since founded Animalia CIC, a social enterprise which aims to support and encourage young people to take up positive opportunities in life and build positive relationships within communities. Part of the basis of this venture was Tony’s experience of working a summer at Camp Allen, a Camp America programme which provides opportunities for friendship, growth and fun for children and adults with disabilities in an outdoor environment.

“When I began working at Camp Allen I had been in a difficult place but it ended up being a life-changing experience for me. My work there helped ignite a passion for helping people to discover their strengths which I’ve carried into my work in Animalia CIC. Taking part in The Circle Academy has also been massively transformational for me. I’ve learned so much that has changed the way I approach my businesses, I’m grateful to Kara and the rest of The Circle team for their support. Camp Allen saved my life; The Circle saved my business.”

Applications for cohort 2 of The Circle Academy are now open. Cohort 2 begins on Monday 24th February 2020. If you’re interested in this programme you can find out more and apply to join the next cohort here: https://thecircledundee.org.uk/the-circle-academy/