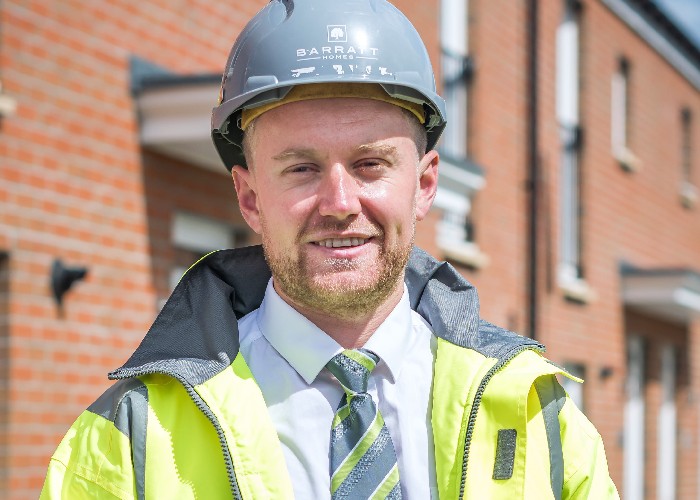 A SITE manager from Barratt Developments Scotland has scooped a top national award for quality in the job from the National House Building Council (NHBC).

Shaun Quinn of Barratt Homes’ Pentland View development in Roslin took home the prestigious Scotland Regional Award in the large builder category at the annual Pride in the Job Awards, which celebrates the highest standards of on-site management.

In addition to Shaun’s win, an additional 13 site managers for Barratt Homes and David Wilson Homes also took home awards for quality during the awards; the housebuilding industry’s most highly regarded competition.

This includes Barrie Mitchell, site manager of Heritage Grange in Edinburgh and Michael Roarty of The Fairways in Bargeddie, who along with Shaun Quinn received three of nine Pride in the Job Seal of Excellence awards given during the ceremony, which recognise the pinnacle of site management in Scotland.

Site managers from developments including The Heathers in Dunfermline, Thornton View in East Kilbride and Riverside Quarter in Bucksburn, Aberdeen, among others, received Pride in the Job Quality Awards for their exemplary standards.

The winners for Barratt Developments Scotland are:

For over four decades, the Pride in the Job awards have recognised the very best site managers from around the country, building confidence in the quality of new homes.

Barratt Developments has won more Pride in the Job Quality Awards than any other homebuilder for 17 years in a row, a record unmatched in the industry which shows its commitment to building homes of the highest quality.

Each site manager is judged on a range of key criteria including quality, health and safety, their technical knowledge, customer service and attention to detail. Pride in the Job is the most highly sought-after award in the housebuilding industry in Scotland with just 41 individual winners being chosen in Scotland.

Doug McLeod, regional managing director for Barratt Developments in Scotland said: “After a challenging eighteen months, it’s fantastic to celebrate so many of our site managers as they receive recognition for being among the very best in Scotland, delivering the highest standards of site management in the creation of high-quality homes.

“An additional congratulations goes to Shaun Quinn on winning the Scotland Regional Award; the second year in a row a Barratt Developments site manager has received the top accolade, reflecting the hard work and pride our site managers across the country display.”