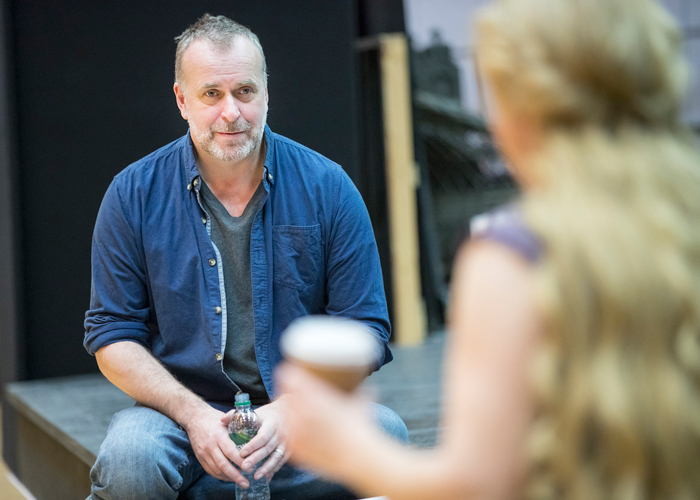 ON MARCH 11, Il trittico (The Triptych) — a new production of Puccini’s Il tabarro (The Cloak), Suor Angelica (Sister Angelica) and Gianni Schicchi — opens at Theatre Royal Glasgow before touring to Festival Theatre Edinburgh. Directed by the world-renowned Scot Sir David McVicar, who last worked with the Company on its 2021 production of Verdi’s Falstaff, this is the first time he has directed the epic triple bill and the first time Scottish Opera has staged it. Only one complete performance of Il trittico has taken place in Scotland, at King’s Theatre, Glasgow, in 1957 by Sadler’s Wells Opera.

A new co-production with Welsh National Opera, this glorious trio of one-act operas tell the stories of people trapped by circumstances and unfulfilled desire. Il tabarro sees a wife stuck in a marriage she longs to escape, Suor Angelica is the tale of an outsider forced into a life for which she has no vocation, and Gianni Schicchi focuses on a dysfunctional family caught in the snare of a shameless conman.

The set designs by Charles Edwards span the 1920s, 50s and 70s and take inspiration from the city of Glasgow and the work of French-Hungarian photographer Brassaï, as well as Oscar Marzaroli, who was famous for capturing images of Glasgow from the 1950s to 1980s.

Il trittico has an early start time of 6pm, with a long second interval for dinner and drinks.  Audiences are able to order food from the theatre in advance, and are advised to do so as early as possible as availability is limited.

Director Sir David McVicar said: ‘Il trittico is such a huge project, with a big and exceptional cast performing in three separate operas, a gripping evening in the theatre that takes us from the dark drama of Il tabarro, through the unbearable heartbreak of Suor Angelica to the acerbic and hilarious Gianni Schicchi, one of the greatest comic operas ever composed. It’s beautiful, tragic, hilarious, epic, and I couldn’t be prouder to be directing Scottish Opera’s first ever production of the three operas, so rarely seen, as Puccini intended, performed in one evening.’

Scottish Opera Music Director, Stuart Stratford, said: ‘Il trittico is the Mount Everest of the Puccini operas. These three, great one-act operas have a most concise structure which makes them so devastating to watch, and yet each is a perfect world in its own right, complete with a different way of delivery of musical material from the performers. Puccini has a special sound world for each, from the French impressionism and passion of Il tabarro to the unbearably sweet, yet poignant, outbursts of Suor Angelica, to the quick-fire stand-up comedy of Gianni Schicchi, leaving the listener after four hours having gone on an exhausting, challenging yet memorable climb to the summit.’

Scottish Opera General Director, Alex Reedijk said: ‘It’s something of a serendipitous confluence that this year sees our 60th Anniversary, Sir David McVicar’s return to Scottish Opera and the staging of Puccini’s triptych by the Company for the very first time. What a way to celebrate our Diamond Anniversary!  We are so excited to bring these incredible operas to Glasgow and Edinburgh, where audiences can expect a truly memorable theatrical experience and the chance to hear all three glorious operas in one night.’

The Company recently launched new afternoon Access shows to allow audience members the flexibility and freedom to relax and move about as required during performances. This Season there will be Access performances (supported by Scottish Opera’s Education Angels) of Gianni Schicchi in Glasgow and Edinburgh.

With Dementia Friendly values at their core, these shorter performances (under two hours including an interval) are open to all, whether you’re recovering from an operation, have breathing difficulties, are living with dementia, have a young baby or on the autism spectrum.

The Access performances, which include a presenter to help guide audiences through the story, are conducted by Head of Music Derek Clark, and performed by a cast of singers. Doors open 45 minutes before the start time so there is no need to rush, brighter lighting levels than usual in the auditorium and there are television screens around the theatre for those who prefer to watch in the lobby or sit in a quiet area.

Half-hour pre-show talks, delving into the detail of Il trittico are also available this season. Those who are visually impaired can take advantage of audio-described performances, where a live commentary is provided, describing the action on stage without compromising the music. As part of the experience, a recorded introduction to the operas is provided in advance, and there is a free Touch Tour of the set and a live audio introduction before the start of the performance.