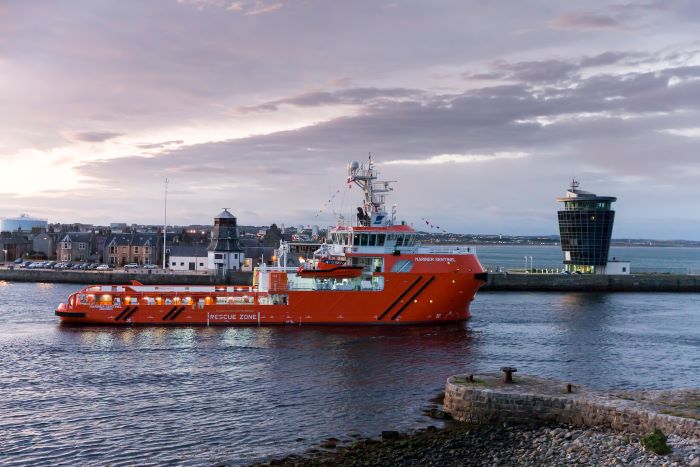 Mariner Sentinel is one of eight new build ships constructed by Sentinel Marine – a further four will be delivered in the next two years.

A £150M INVESTMENT has allowed support vessel operator Sentinel Marine to introduce the newest fleet of emergency response and rescue vessels in the North Sea – and help clean up the offshore environment.

The average age of the Aberdeen-based firm’s ships is just two years, which means that, along with being the youngest in the sector, the fleet is also the cleanest and greenest.

All eight ships recently built to order by Sentinel Marine – and the four still under various stages of construction – have Tier 4 compliant engines which reduce emissions of particulate matter and noxious gases to near-zero levels.

“Our fleet is currently one of very few in the North Sea to utilise Tier 4 engines. When we made this multi-million-pound investment, we not only wanted to deliver a fleet that would be operationally efficient but one that would deliver positive environmental benefits.

“Although the real focus of Tier 4 engines is to reduce emissions, the overall design also incorporates many fuel-saving technologies and features aimed at enhancing productivity. Manufacturers use lightweight materials, advanced energy storage, and global positioning and telematics to reduce fuel costs and conserve energy.

“Historically, ERRVs operating in North Sea oilfields were originally built for use in other sectors and then repurposed as support vessels. Many of these ships are now decades old and while still perfectly capable of performing a support role, cannot deliver the same kind of efficiencies.

“It’s estimated that our fleet is around 60% more fuel-efficient than some of the oldest ERRVs in the North Sea, and as much as 30% more efficient than vessels that were built only five years ago. For example, one of our new-build ERRVs would consume around 1.5t of fuel per day on service at an offshore field whereas a vessel 20 years old may consume 3t of fuel per day.”

The new Sentinel Marine fleet has been built at shipyards in China and developed with sustainability in mind. Each vessel has a green passport – a list of all materials potentially hazardous to human health and the environment which were used in its construction – which accompanies that vessel through the lifetime of its service. When the ship is decommissioned, the passport is sent along with the ship to the recycling yard.

Another key element which delivers efficiencies is the ability of the ships to perform a multitude of different roles. While the primary function of ERRVs is to protect the lives of offshore workers, Sentinel Marine ships are built to undertake a wide range of additional tasks from oil recovery to towing and on to cargo handling.

This delivers both operational and cost efficiencies, as it negates the need for two different vessels to be chartered. The four vessels still under construction – due to come into service within the next two years – have enhanced features such as increased DP capabilities, a DP2 class notation, firefighting class 1, oil recovery, liquid mud and dry bulk capacities. All have been designed to provide greater levels of crew comfort, both in terms of facilities and through the use of anti-rolling tanks.

Mr Deans added: “There is a growing appetite among North Sea operators for the type of ERRV that Sentinel Marine has developed, as they understand the level of task and cost benefits that using new-build ships can deliver.”

Sentinel Marine has offices in Aberdeen and Singapore and owns a fleet of vessels providing reliable, disruption-free and safe services to the offshore industry. More about Sentinel Marine can be found at www.sentinel-marine.com.