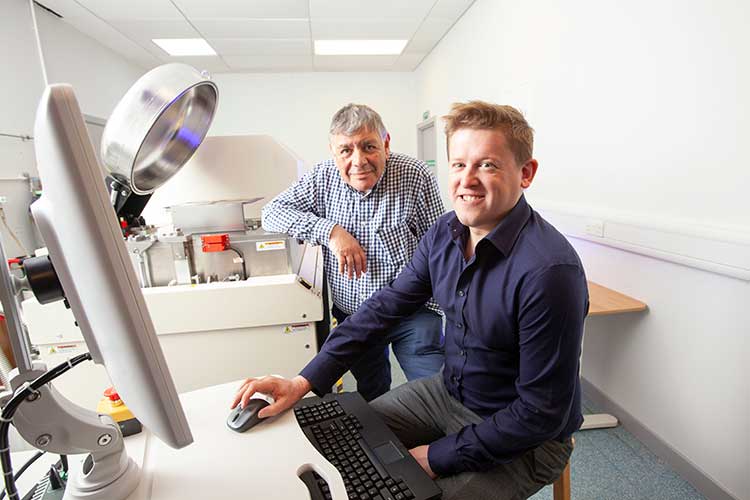 Novosound, the developer of a ground-breaking technique to mass-manufacture printable ultrasound sensors, has received a £1M grant from Scottish Enterprise as part of a £2M project which will rapidly scale up the company’s R&D activity and recruit new, highly skilled staff.

The company, which is based at Biocity, the biotech incubator located on the M8 just outside Glasgow, was the first spin-out company from the University of the West of Scotland raising £1.5 million at its seed investment round in April 2018.

The company will create seventeen new positions for highly skilled employees with expertise in STEM disciplines to accelerate the company’s R&D programme developing hi-tech sensors for industrial and medical markets, bringing staff numbers to over 30.

Novosound, which was founded by Dr Dave Hughes and Richard Cooper, has revolutionised ultrasound technology, which had remained largely unchanged for 40 years, by replacing conventional sensor materials with a flexible piezoelectric thin-film.

Dr Dave Hughes said: “The global opportunity for Novosound is enormous with the ultrasonic market now valued at $45 billion and growing at over 10% every year and this funding will allow us to scale up and significantly accelerate our R&D and production activity.  As well as bolstering our existing R&D team, it allows us to create seventeen new highly skilled jobs for technical people with STEM skills which we are looking to fill in the coming months. Currently, our R&D team is 50% female and we hope to build on this with the new recruits.”

Medical ultrasound technology was pioneered in Glasgow 60 years ago by Professor Ian Donald who developed the technology for use in medical diagnostics utilising industrial ultrasound equipment from near-by Babcock-Wilcox in Renfrew (now Doosan Babcock).

Dr Dave Hughes added: “It is exciting that we are based just a few miles away from where Professor Ian Donald pioneered diagnostic ultrasound technology in the 1950s.  At the time, he created truly revolutionary technology and our team is motivated to build on Scotland’s history of invention in medical imaging and ultrasound.

“Whilst ultrasound is best known for its use in hospitals around the world, it is also the go-to tool for non-destructive testing in numerous sectors including oil & gas, aerospace, and nuclear.  For example, the current, and dated, sensor technology can only operate at low temperatures and therefore, the oil & gas industry alone incurs costs of billions of dollars every year because they have to shut down refineries to allow the testing to be carried out.

“Our technology works efficiently at high temperatures thus removing the need to shut down at all, saving those lost billions of dollars. By applying our technology in different ways, similar cost-savings can be found in aerospace and renewables.

“This grant also enables us to create a medical sensors team at Novosound. NHS England alone carries out around 9 million diagnostic ultrasound scans every year and so the prospect within healthcare is exciting too.  Here, our tech can create MRI resolution images but without the cost. This is game changing.”

Business Secretary Jamie Hepburn said:  “I am pleased to announce that Novosound has been awarded a £1 million R&D grant from Scottish Enterprise which will create 17 new jobs and develop innovative new technology.

“We want Scotland to be a leader in the technological and social innovations of the future, to harness that innovation to improve lives for the better and to export our solutions to the rest of the world. That is why we have set an ambitious target of doubling business expenditure on research and development from £875million in 2015 to £1.7billion by 2025.

“I look forward to Novosound developing its business further in the coming months and years as the company grows and becomes a leading developer in hi-tech sensors.”

“Since spinning out of the University of the West of Scotland, Novosound has made excellent progress.  This £1m grant from Scottish Enterprise will not only allow Novosound to increase its R&D capability, but create 17 skilled jobs in the process.

“Providing support to entrepreneurially-minded companies, such as Novosound, to allow them to achieve their growth ambitions is a key priority for Scottish Enterprise as part of our recently published Strategic Framework.  Scottish Enterprise looks forward to continuing to work in partnership with Novosound as the company develops its global presence.”

The business has recently moved to a new 2,400 sq ft laboratory and manufacturing facility at BioCity to allow all manufacturing to be undertaken on-site and by the company’s specialist staff using a newly installed £350,000 piece of equipment which creates the core sensor material.

Early stage investors in Novosound include: