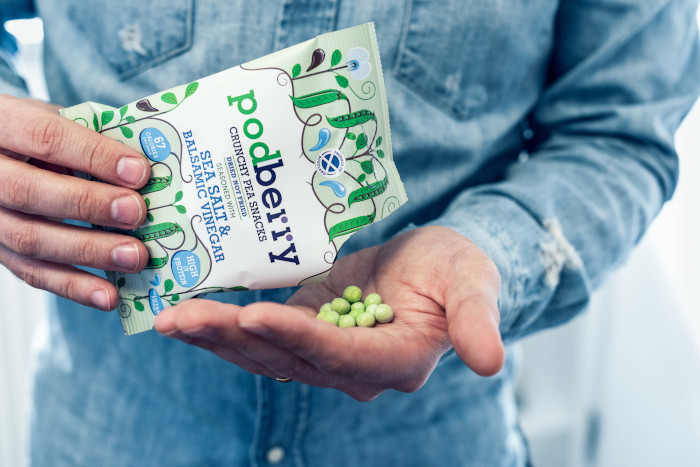 SCOTTISH snack brand Podberry has announced a number of exciting new partnerships to start 2020. A demonstration of the growing demand for healthy and tasty snacks these new collaborations will allow easier purchase of Podberrys delicious freeze-dried pea snacks, both in the UK and overseas across the Middle East.

In addition to both of these partnerships, Podberry will also be featured in Januarys The Goodness Project’s deliveries. Inclusion within this subscription box will mean more consumers, with an existing interest in vegan and natural products, will be introduced to this unique, tasty and healthy snack.

Originally launched in 2019 the last year has seen a number of exciting developments for Podberry. With listings in Morrisons for their initial two flavours in August, a second launch of two further flavours in September and a partnership with Officedrop to end the decade 2020 promises to offer even further exciting opportunities for the Scottish brand.

The UK’s first freeze-dried seasoned snack product made with Scottish-grown produce comes in 20g single-serve packs and four delicious flavour variants. Initially developed with help from experts in New Zealand, the fresh peas are harvested and frozen in under two and a half hours before undergoing a freeze-drying process prior to flavouring and packaging.

This, and the fact that unlike other snacks the product is never fried, means consumers are guaranteed the highest level of nutrients and flavour in every pea.
Created with understanding around a growing demand for healthy and convenient food products, Podberry are high protein, low in fat, gluten-free, vegan-friendly and 1 of your 5 a day with no compromise on flavour.

Geoff Bruce, Director of Podberry, said of the new listing:

“We learnt a lot in 2019 with the launch of Podberry and hope that 2020 offers us even more exciting opportunities which allow us to get our delicious and unique snack product to the consumer.

“Demonstrating the national, and global, growing demand for healthy snacks which don’t compromise on flavour, convenience or quality the two deals, with Lulu and The Bay Tree, as well as our inclusion within The Goodness Projects boxes, are a brilliant start to our year.
“Despite these positive moves we don’t plan to stop there. We hope to secure more exciting deals over the next 12 months and are working hard to ensure that Podberry becomes common sight in shops, both big and small, here and overseas.”