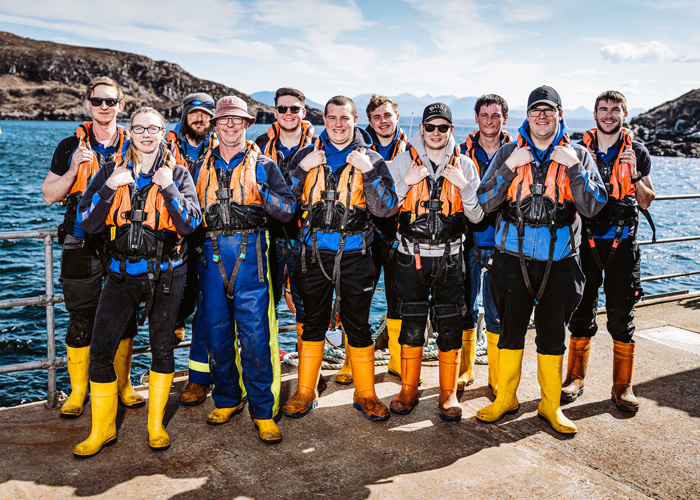 SCOTTISH Sea Farms has been awarded Aquaculture Stewardship Council (ASC) certification for its Summer Isles farms, the first time the company has achieved the coveted accreditation.

Considered one of the most demanding of all global seafood certification schemes, the target is to have up to five farms and facilities ASC certified by the end of 2022.

For a farm to gain certification, it must be independently audited and assessed as meeting each requirement – a feat that fewer than five per cent of salmon farms in Scotland have achieved to date – and reassessed annually to maintain the ASC endorsement.

“It wasn’t that we weren’t already farming to high standards; in every instance we were. However, there was still a considerable amount of work involved in evidencing and reworking our processes and procedures.”

The three Summer Isles farms have a track record of exemplary fish health and welfare, with average survival of 94.2% across the last three crops, an average harvest weight of 6kg, and 91.7% of all fish harvested graded ‘superior’.

Farm Manager Sarah Last said: “The last three crops have been record-breaking for us in terms of high fish survival and low lice levels, thanks to vigilant husbandry of both salmon and cleaner fish, so there hasn’t been an overhaul of our farming approach as such.”

“Where ASC certification has been invaluable, however, is in highlighting ways in which we could hone some of our day-to-day activities even further; small changes which, when combined, could make a big difference.”

Senior Aquaculture Technical Manager Matthew James of LRQA Group, who carried out the audit, commented: “We were impressed both by the high level of compliance achieved at a first audit, and the knowledge and enthusiasm throughout their farming team.”

In addition to gaining certification of its first farm, Scottish Sea Farms also achieved chain of custody certification of its processing and packing facilities at South Shian near Oban – confirmation that the necessary procedures are in place to ensure that any fish that go on to carry the ASC logo are indeed from an ASC certified farm.

Work is now underway to achieve chain of custody certification for the company’s processing and packing facility in Scalloway. The next farm earmarked for certification is Lober Rock in Orkney.

Anna Price continued: “ASC certification is a win-win. It gives customers further reassurance, and it gives farmers a chance to see and draw from international best practice. Going for certification of more farms can only be a good thing for all.”