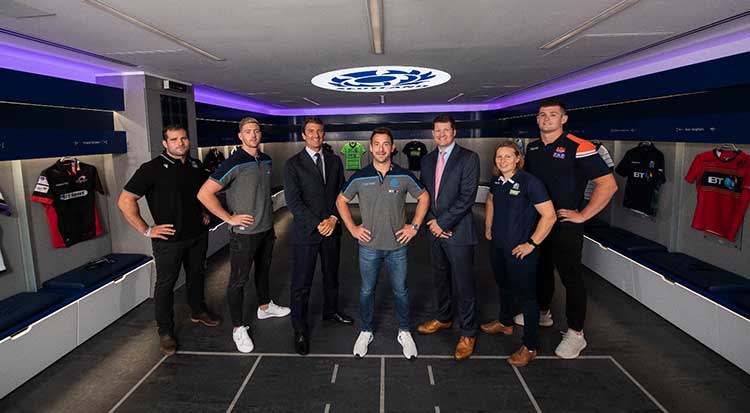 Scottish Rugby has announced a six-year extension to its partnership with kit suppliers Macron which will run until at least June 2026.

The seven-figure deal represents a significant uplift on the previous agreement signed in 2016 and will see Macron supply match and training kit for the Scotland men’s team through this autumn’s Rugby World Cup in Japan and beyond, as well as sevens, women’s and age grades sides.

The country’s two professional clubs, Glasgow Warriors and Edinburgh Rugby, Fosroc academies and referees will continue to wear Macron shirts as part of the contract extension which kicks in after the conclusion of the current agreement in June 2020.

Macron has supplied kits for Scottish Rugby since 2013 although their relationship with governing body goes back to 2010, when they supplied kit for Edinburgh Rugby. They have operated as Scottish Rugby’s retail partners since 2014.

Based in Bologna, Italy, Macron is one of the Europe’s premier sports kit manufacturers.

The company has a major footprint in Scotland, with Hibernian, Motherwell, Dundee United, Dundee, Queen of the South and Ross County among the football clubs who will wear Macron kit next season.

Scottish Rugby Chief Executive Mark Dodson said: “I am very proud we can continue to work with Macron for a further six years taking the partnership beyond the 2023 Rugby World Cup cycle.

“It is a testament to the quality of the relationship we have with Macron and the products they produce that we can form a long-term mutually beneficial relationship which has grown significantly in recent years.

“It provides excellent business and operational continuity for Macron to supply all our kit requirements until 2026 and I look forward to working with Gianluca and his team in the years to come.”

Gianluca Pavanello, CEO Macron, said: “What we have with Scottish Rugby is a really special relationship and we are so pleased to be able to proceed forward in a long-term partnership with such a prestigious international team.

“Here in Scotland we have been given the unique opportunity to develop with the Union and clubs the highest level of rugby technical apparel for the modern-day athlete as well as a leisurewear and accessories range that are not only fashionable but unique technical designs of the highest level. We at Macron are excited to continue to develop and design hand in hand with Scottish Rugby in this long-term project.”

He also added: “The Scottish market is a key strategic area for our company and to have elite partners such as Scottish Rugby is not only a great honour for us to be working in synergy with, but I say with pride the great friendships we have created together across the years.”

Scottish Rugby’s Chief Operating Officer Dominic McKay said: “Our relationship with Macron has grown significantly in recent years and it is fantastic we can continue to work together through to 2026.

“We have seen significant growth in our brands of Scotland, Glasgow Warriors and Edinburgh Rugby in recent years. Macron have played an important role in this.

“This is in part through growth in UK and global sales for the shirts Macron have produced with us and seen an expansion of their brand across club rugby and sport in general over the period we have worked with them.

“I’d like to personally thanks Gianluca and his talented team for being great partners.

“It is global partnerships such as these which are enabling Scottish Rugby to invest in all aspects of our sport, from local grassroot clubs through to the national stadium.”

Ross Cook, Sports Marketing Manager from Macron, added: “A partnership like this doesn’t come around all that often. I am first and foremost a fan of Scottish Rugby and to be given the privilege to work hand in hand with the Union and clubs as well as their top athletes to develop and design products and collections to the highest technical specs is a true honour.

“The close collaboration that we enjoy with Edinburgh Rugby, Glasgow Warriors and Scottish Rugby allows us to keep striving for the newest product innovations while at the same time keeping the focus on the fans requirements and fashion needs. Our goal is to keep expanding the collection and retail offering that allows the supporters to walk to the ground with pride as they cheer on the pride of our nation.”