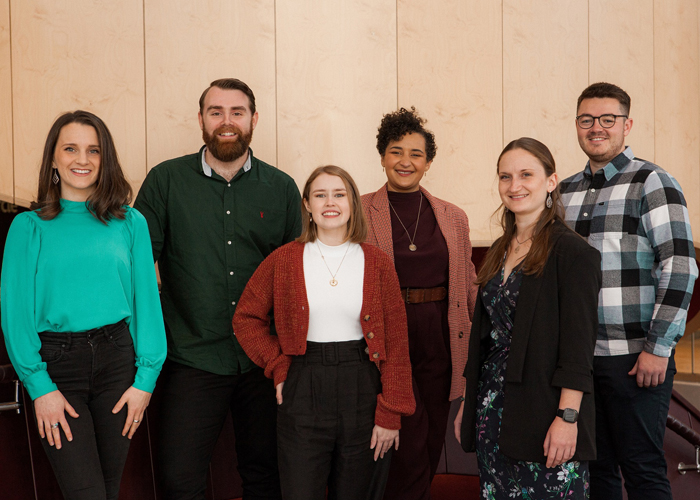 In this year, which is the Company’s 60th Season, Scottish Opera is delighted to be welcoming its 60th Emerging Artist since programme began in 2009. Initially set up to offer outstanding young singers a period of full-time work to help them launch their careers, the programme now also includes positions for a repetiteur and a costume trainee. Previous Emerging Artists include soprano Jennifer France, repetiteur Jonathon Swinard, baritone Ben McAteer and composers Gareth Williams and Lliam Paterson.

The Emerging Artists have opportunities to perform with Scottish Opera in live productions throughout the Season as well as work in-house with staff and visiting coaches to develop their skills. Supported by Scottish Opera’s Emerging Artist Benefactors and Supporters, Elizabeth Salvesen and Jean and Roger Miller Charitable Trust, they will also perform in recitals at University of Glasgow and Royal Conservatoire of Scotland.

Sarah-Janes Davies, Head of Casting at Scottish Opera, said: ‘I am proud to welcome Zoe, Osian, Colin and Kristina onto the Emerging Artists programme, joining Lea for the 2022/23 season. All have exciting projects ahead of them and are already busy preparing for these with the support of our team. Kristina, Zoe and Osian have just completed a very successful tour of Scotland with the Opera Highlights performances, whilst Lea and Colin recently finished performing in our five-star production of Ainadamar. They will all join up together for the lunchtime recitals at the RCS and Glasgow. I look forward to working with them all on this thrilling new adventure.’

Emma Butchart, Deputy Head of Costume, said: ‘We are very pleased to welcome Isabelle, our latest Costume Trainee, to the team. She started off with a bang as Assistant Supervisor to our Head of Costume, Lorna Price, on our recent production of Ainadamar. Isabelle’s continuing her training in all areas of the costume department and has now begun in the workroom on our upcoming productions of Il trittico and Carmen. During her yearlong traineeship, she will have the pleasure of joining the running wardrobe team on one of our productions. We have no doubt it will be another successful partnership.’

Welsh tenor Osian Wyn Bowen originates from the harbour town of Burry Port, South Wales. Osian is a recent graduate of the David Seligman Opera School at the Royal Welsh College of Music and Drama. In 2019, Osian was the winner of the MOCSA Young Welsh Singer of the Year and a finalist in the RWCMD Ian Stoutzker Prize for most outstanding musician. He was also a finalist in the 2022 Welsh Singers Competition. In the 2021/22 Season at Scottish Opera, Osian sang in productions of The Gondoliers and Utopia, Limited. This Season, he has appeared in the Autumn Opera Highlights tour and is in the cast of Il trittico and Carmen next year.

Australian soprano Zoe Drummond is a graduate of the Guildhall School of Music and Drama, the Sydney Conservatorium of Music, and the Melba Opera Trust. She performed in Scottish Opera’s recent production of The Gondoliers, Utopia, Limited and the Opera Highlights Spring 2020 tour. This Season, she performs in Carmen and featured in the Opera Highlights Autumn tour.

Costume trainee Isabelle Mercier is originally from Melbourne, Australia, and moved to the UK in 2018 to study at the Arts University Plymouth completing a Bachelors of Costume Production and Associated Crafts in 2021. Since then, she has worked as a seamstress for a small local business, as well as a dresser at the Theatre Royal Plymouth working on shows such as Singing in The Rain. Other projects she has worked on include Macbeth for The Actor’s Wheel (associated with Marjon University) for which she helped design the costumes, and California Suite (an amateur theatre production during her time at High School), which included dressing and costume sourcing.

Colin Murray is a Glasgow-based baritone and graduate of the Alexander Gibson Opera School at the Royal Conservatoire of Scotland. He is an in-demand concert soloist, award-winning ensemble singer, and has appeared in Scottish Opera productions of Don Giovanni, The Gondoliers, Utopia, Limited and Candide. This Season, he has performed in Ainadamarand Thérèse, and will be in the Company’s upcoming production of Carmen, and the Spring 2023 Opera Highlights tour.

Mezzo soprano Lea Shaw returns as an Emerging Artist for a second year, having previously performed in Company’s productions of Candide, A Midsummer Night’s Dream, Don Giovanni, Opera Highlights, Mavra and in the chorus of The Fiery Angel. Lea is an award-winning Black/BIPOC mezzo-soprano from Colorado, who studied at the Royal Conservatoire of Scotland where she received her Masters of Music, and a Masters of Opera from the Alexander Gibson Opera School, with the guidance of Helen Lawson, Susan Bullock and Rachel Nicholls. Lea was a member of the Ainadamar ensemble, and will appear in Carmen as Mercédès.

Bulgarian pianist Kristina Yorgova graduated with a MMus from the Royal Conservatoire of Scotland where she studied with Petras Geniusas and Fali Pavri. She was a finalist at the 8th Stasys Vainiunas International Piano Competition in Lithuania. Kristina has performed as a soloist with the Lithuanian Chamber Orchestra, The RCS Symphony Orchestra, and the Stara Zagora and Vidin Orchestras in Bulgaria. She has played recitals across Europe including in Bulgaria, Belgium, France, Germany, Italy, Lithuania, Norway, and Russia. Kristina has freelanced in orchestral piano / celeste with the BBC SSO since March 2019. Projects included Reich’s Music for 18 Musicians, Stravinsky’s Firebird and Petrushka, and Ligeti’s Mysteries of the Macabre. In 2020, Kristina worked for the RCS Vocal Studies department, coaching singers at Bachelor’s and Master’s level. As an accompanist, sheplayed for RCS vocal master classes and worked closely with Head of Coaching Julia Lynch in German lieder classes. She is passionate about collaborating with singers, most recently with mezzo-soprano Svetlina Stoyanova. Kristina was a Studio Artist Repetiteur for 2020-2022 at the Mascarade Opera Studio in Florence, where her work was guided by Head of Music Julia Lynch and conductors Sándor Karolyi and Jonathan Santagada.