Scottish Opera Highlights tours this autumn to 17 venues across Scotland 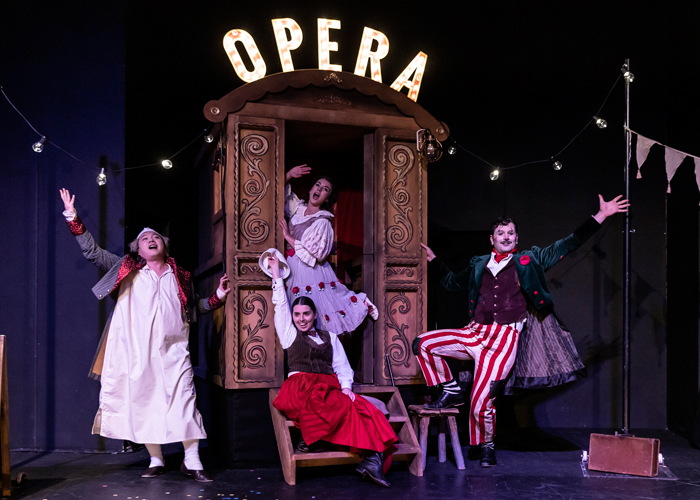 SCOTTISH Opera’s hugely popular Opera Highlights is taking to the road this Autumn, travelling across Scotland from Castle Douglas to the North Isles of Shetland.

Director Emma Jenkins and designer Janis Hart bring verve and creativity to this year’s original piano-accompanied production. The cast includes Scottish Opera’s 2022/23 Emerging Artists Zoe Drummond and Osian Wyn Bowen who both performed in The Gondoliers and Utopia, Limited 2022, alongside Christopher Nairne and Shakira Tsindos, led from the piano by Scottish Opera’s 2022/23 Emerging Artist repetiteur Kristina Yorgova. With 1970s inspired costumes, join the cast as they transport to another world, where anything is possible. The production also features the world premiere of a new piece by Scottish Opera 2021/22 Emerging Artist and composer Toby Hession, with libretto by Emma Jenkins. Titled ‘Told By An Idiot’ it is a modern and humorous re-working of Macbeth.

Scottish Opera’s Head of Music Derek Clark, combines repertoire favourites, with a treasure trove of lesser-known pieces. The playlist includes much-loved classics from Mozart’s The Magic Flute and The Marriage of Figaro, Beethoven’s Fidelio, Verdi’sMacbeth and Bizet’s The Pearl Fishers Duet alongside music by Rimsky-Korsakov, Gounod and music written by Mendelssohn when he was just 12 years old. It is the ideal opportunity to experience a selection of Opera Highlights in a two-hour performance.

Director Emma Jenkins said: “Four young singers in search of an identity find themselves, like Alice in Wonderland or the children of Narnia, propelled along an operatic rollercoaster of love and loss, devotion and desire, jealousy and jubilation. The overriding theme of the Opera Highlights is LOVE. Love in all its forms, both positive and negative. Our singers put on and take off various roles as if possessed by the force of love in a fast-paced performance that celebrates not only the voice, but also ensemble work and physical theatre.  All this against the backdrop of Janis Hart’s stunning design which combines a retro 70s feel with an anarchic theatrical space in which one feels that anything could happen!”

Derek Clark said: “The programme is the usual mixture of the familiar and the less well-known, so we are confident that there will be something for everyone to enjoy, whether you are an experienced opera goer, or coming to see us for the first time.”

Opera Highlights is supported by The Friends of Scottish Opera and JTH Charitable Trust.

Tickets are on sale now at www.scottishopera.org.uk/shows/opera-highlights-202223/