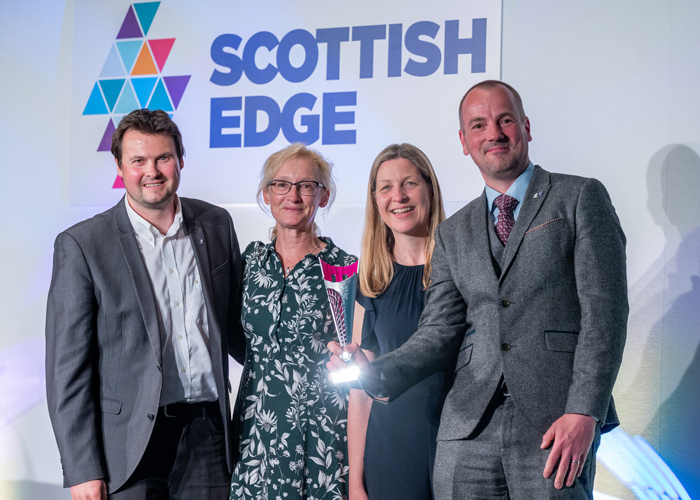 A TOTAL of 40 businesses with entrepreneurial potential have benefited to the tune of over £1.5 million after being named winners at the Scottish EDGE Awards, which also featured guest speakers and previous EDGE winners Darina Garland and Kristian Tapaninaho of Ooni pizza ovens in conversation with Ewan Hunter, CEO of the Hunter Foundation.

One of the biggest winners at the awards was Edinburgh-based Lentitek Ltd, a provider of next-generation cancer therapy treatment CAR-T. The firm, founded by Adam Inche, received a total of £100,000 in the award sponsored by the Industrial Biotechnology Innovation Centre (IBioIC) in Glasgow.

In the Young EDGE category, for entrepreneurs under the age of 30, winners included North Coast Watersports and Robocean, who received the top Harper Macleod and Scottish Enterprise £15,000 prizes respectively.

Scottish Enterprise agreed to extend its contribution of £75,000 in the Young EDGE category for both rounds 19 and 20, enabling a further seven winners aged 18-30 to be supported each round, taking the total to 14.

Leah Pape, Head of Entrepreneurship and Investment at Scottish Enterprise, said: “The high calibre of innovative applicants EDGE attracts is testament to its ever-growing reputation and gave the EDGE 19 judging panel a very tough job! Our congratulations to all the winners.”

“Scottish EDGE has an important role to play in supporting innovative, high growth potential start-ups, and Scottish Enterprise is proud to help nurture the entrepreneurial talent that will drive Scotland’s future economic prosperity through our continue support for the Young EDGE catergory.”

Wildcard EDGE winners – the category for pre-trading companies, sole-traders and partnerships – received £85,000 in total, including Samastar which was awarded £15,000.

As the standout business from a circular perspective, POTR Pots received £50,000 as the winner of the Circular Economy Award, supported by Zero Waste Scotland, for its range of flat-pack, origami, self-watering plant pots and vases, made using recycled and bio materials.

Another winner of the night was Love Electric Financial Services Ltd that received £70,000 plus £75,000 advertising spend through the STV supported STV Growth Award.

In the Social Enterprise category, supported by the Postcode Innovation Trust, Glasgow-based company The Whisky Chairmen received £50,000 for its zero-waste manufacturing social enterprise tackling poverty and social isolation in Inverclyde.

The additional funding from Royal Bank of Scotland and Scottish Enterprise compliments the £1,000,000 boost led by The Hunter Foundation from several of Scotland’s leading entrepreneurs last year. The final brings the total pot of money awarded through Scottish EDGE to support early stage, high growth businesses to over £20 million in the 19 rounds now completed with over 500 successful applicants.

Judith Cruickshank, Regional Managing Director for Scotland & North of England, Royal Bank of Scotland, said: “Enterprise is at the core of our economy, and the financial sector has a collective responsibility to foster an environment where entrepreneurs can start, scale, and thrive.”

“The time to act on climate change is now and investing in high growth businesses through initiatives such as the Net Zero award not only has a positive impact on individuals, but on the future of Scotland as a nation.”

“At Royal Bank of Scotland, we are committed to championing SMEs and each and every one of this year’s winners demonstrates the passion, innovation and determination needed to help bolster and strengthen Scotland’s economy after a challenging period, while also making positive strides towards our climate ambitions. Congratulations to this year’s winners.”

Evelyn McDonald, CEO of Scottish EDGE added: “It’s now our eighth year running Scottish EDGE and it’s been a real pleasure to have supported over 500 businesses throughout this time. Scottish EDGE was set up with the intention of providing a solution to the funding gap for potential high growth businesses so we’re delighted to be able to invest a further £1.5million in this latest round to an additional 40 businesses. The success achieved doesn’t only benefit the companies but provides a potential much needed boost to the wider Scottish economy.”

This year, Scottish EDGE received 177 applications. The finalists pitched to judges on 25th and 26thMay in front of a live audience.

Scottish EDGE promotes long-term sustainability of the funding pot through its pioneering ‘EDGE pledge’, inviting award winners to sign up to contribute a minimum of 1% from exit proceeds back into the fund.

Scottish EDGE is supported by The Hunter Foundation, Royal Bank of Scotland, the Scottish Government and Scottish Enterprise and has a vital role to play in the country’s economic growth.