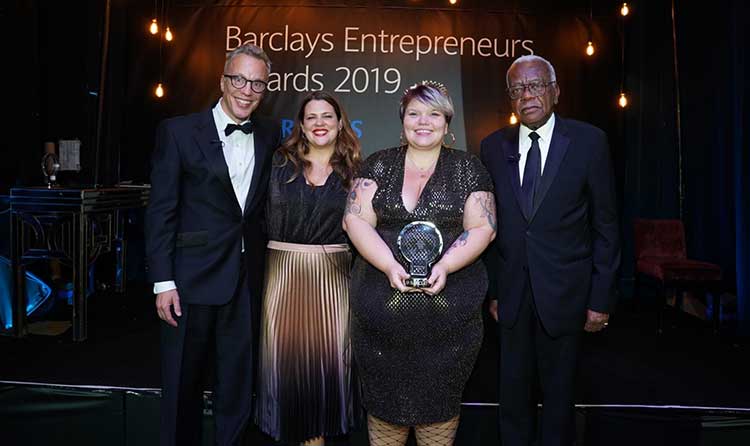 Two Scottish entrepreneurs have come out on top in Barclays Entrepreneur Awards 2019, which celebrates the most innovative, disruptive and socially inspiring businesses across the UK.

Thanks to Brie from Edinburgh’s bright idea to produce a range of tights that come in seven different sizes, varying in both length and width, Snag has reached 200,000 women worldwide and has sold over a million pairs of tights, generating over £2.2m in revenue in its first year of trading. The Scottish company is now worth over £15m and has sold tights to customers in over 70 countries. Exploiting this new opportunity and challenging the status quo helped make Snag stand out as the overall winner of the competitive category.

Inspiring Snag bagged the double, taking home the People’s Choice Award which debuted this year and saw over 3,000 votes cast over the course of just four weeks – a testament to the relationships the nominated entrepreneurs have built within their communities.

The Edinburgh founded global social enterprise Invisible Cities trains people who have experienced homelessness to become walking tour guides of their own city. Operating in Edinburgh, Glasgow, Manchester and York, the company has plans to expand to more cities across the UK. The transformative social change being delivered by Invisible Cities, and the example being set for the future generation of social enterprises, were defining factors in its success in this category.

Launched in 2016, the awards are a celebration of the UK’s most innovative entrepreneurs from  start-ups to icons. All entrants are shortlisted regionally and then put forward  to a panel of national experts from the wider entrepreneurial eco-system. The awards are open to all businesses and individuals who are breaking the mould and growing at pace and also recognises those who’ve been on that journey and are now giving back.

“Scotland has a rich heritage of innovation and our Entrepreneur Awards are the perfect way to shine a light on the inspiring individuals and start-ups who are continuing to blaze a trail and build on this legacy.

“Scotland is an attractive and dynamic market for businesses big and small and this is exemplified by not one, but two, Scottish winners at our UK national awards who are making valuable contributions to both the economy, and society, as a whole. A huge congratulations to all the finalists, with a special mention to our Scottish winners.”

“We want to thank Barclays so much for supporting a female led, size inclusive business like Snag. It means so much to us and our customers that an organisation like Barclays recognises the difference a genuinely inclusive brand can make. It’s been an incredible first 18 months and everything we’ve achieved has been down to our amazing customers, and the support of our partners like Barclays.”

Now in its fourth year, Barclays Entrepreneur Awards 2019 took place on Thursday 10 October 2019 at the Bloomsbury Ballroom in central London and was hosted by newsreader Sir Trevor McDonald OBE.

The awards also marked the launch of a new report from the Female Founders Forum which highlights some of the positive steps being made to directly support female entrepreneurs. Here and Now: Making the UK the Best Place in the World for Female Founders reveals that female-founded start-ups have doubled their share of equity investment and are now just as likely to raise additional rounds of funding compared to non-female-founded firms.