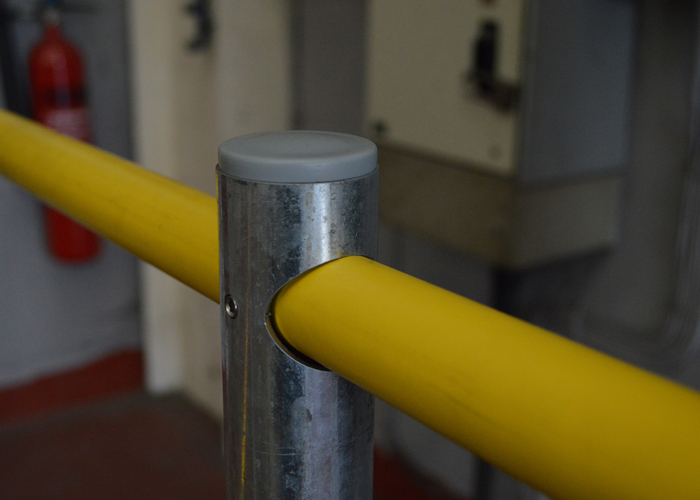 A SITE safety specialist is delivering the first major innovation in 90 years for simple handrails which protect millions of workers across the UK.

Managers of the £3 million+ a-year firm, which employs 11 people, have harnessed the latest laser-cutting technology to transform how its tubular steel systems are produced and how the components fit together securely.

Anthony Wells, Managing Director of the firm, unveiled the new system, called ModiFix, and said: “Delivering the first major innovation in a product since the 1930s is something we are proud of. Tubular steel handrails are so ubiquitous that they are virtually invisible. It is like they have been around so long and are so prevalent that no-one stopped to think how they could be improved.

“The innovation we have brought to this is genuinely transformative and brings multiple benefits for health and safety, for the environment – and also in terms of reduced costs. While this might not mean much to the man in the street, it is of huge interest to local authorities, facilities managers, engineers and contractors or subcontractors across huge numbers of sites.”

Kite Group has more than 500 clients across the UK and major projects in Scotland have included the Forth Bridge, Edinburgh Trams and Edinburgh Airport. Its metal handrails are used in sites as varied as oil rigs, petrochemical plants, railways, gas and electricity facilities, water works and on the roofs of countless commercial and industrial buildings including factories, supermarkets and offices.

Until now the parts had to be fitted together with multiple clamps or welding. However, the new laser precision-cut process allows them to be assembled and fitted more quickly and efficiently, without clamps or welding.

By doing away with clamps, the new system reduces the amount of steel required, lowering costs by up to 20%. It has been rigorously tested to meet load rating regulations to current British Standards.

Mr Wells added: “This is great news for businesses, particularly as the cost of steel has more than doubled in the past year. Anything that offsets those rises without compromising safety must be welcomed

“It’s also great news for the environment because it dramatically reduces the carbon footprint of every project we complete with the new technique. On top of that there are clear health and safety benefits from eliminating the need for welding.”

Since being founded in 2003, Kite Group has gone on to become one of the foremost UK suppliers of handrails, walkways, ladders, access stairs, roof edge protection systems and fire escapes all made from galvanised steel tubes.

However, the technology to allow precision cutting at scale – so that tubing can pass through holes in posts without the need for clamps or welding – has only recently become available with advances in computer-controlled laser cutting equipment.

Mr Wells, who took the helm at Kite Group in 2020, revealed how his previous experience, spanning 40 years in production and global distribution of rigid mesh fencing, inspired the changes. He added: “I’ve always challenged myself to find ways of doing things cheaper, better or faster and I am known for not being afraid to ask awkward questions challenging the status quo.

“In the fencing sector, laser cutting is an everyday element of the business. When I arrived at Kite Group and was shown how everything was done, it struck me as very traditional, so I immediately asked if there were other ways we could be doing things.

“The team have risen to that challenge brilliantly and ModiFix is the result. With so many potential users – including architects, specifiers, engineers and facility managers across dozens of sectors – we are incredibly excited about the future of this product.

“Part of the flexibility of this is that the system is modular. Anyone who is upgrading or replacing a section of existing handrails can use the new system without having to replace the entirety. They get the cost and environmental benefits while addressing only the sections that need renewed.”

He added: “Once measured and ordered, installation was efficient, uncomplicated, and completed by the specialist team within a couple of hours. It is strong, robust, and highly visible and offers an additional effective layer of protection that improves safety for employees and visitors alike.

“The whole system is so much sleeker than the traditional systems of clamp fittings and even the welded ball systems.”

Further information on the new ModiFix system is available at https://www.kitegroupltd.com/modifix-railing-system/