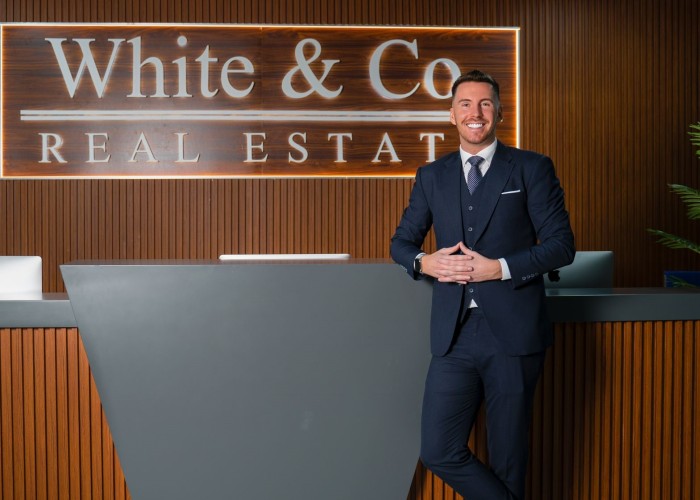 A SUCCESSFUL Scottish recruitment drive has helped Dubai businessman, Calum White, establish his estate agency as one of the emirate’s most successful brokerages.

The Edinburgh-born entrepreneur set up White & Co. Real Estate in January 2021, seven years after first moving to the UAE after becoming disillusioned with life in the UK.

Keen to encourage more ambitious Scots to try a life abroad, Calum focused on his homeland for agents to help get the business up and running.

Casting his net far and wide, he soon had interest from people the length and breadth of the country interested to sample the Dubai lifestyle.

Formerly with McEwan Fraser Legal in the Capital, Calum opened the doors to a 16,000 sq. ft office in Control Tower, Motor City, close to the exclusive marina district, at the beginning of last year.

There were initially eight employees running the start-up which turned over £4m in its first year. Fast forward 18 months and 29-year-old Calum now has over 130 staff, 50 per cent of whom are Scottish, with his company racing up the rankings.

“There is something about the Scots, a bit like folk from Liverpool and Manchester to be fair, who have a certain understanding of hard work, know how to conduct themselves and how to respect other people’s cultures,” he said.

“I wanted to encourage people aged between 20-30 to come out here and try the Dubai life. I wanted focused young sales people in that bracket to come over as they have the potential to change their lives.

“The opportunity for people here is huge, particularly in real estate. It’s a performance-based industry which I love, there is uncapped commission so people can make genuinely life-changing money.

“50 per cent of my staff are Scottish, the most of any local real estate firm here, and some of my top performing agents are from Scotland. If you work hard, the sky is the limit.

“We generated £4m of business in our first year and are already beating that this year. We couldn’t have accomplished it without everyone’s efforts, which is evidence of their hard work.”

Operating in both the residential and commercial markets, White & Co. Real Estate continues to go from strength to strength, and was recently named Dubai’s second-highest lead-generating agency for buying, selling and renting.

In addition, the firm recently won the title of agency of the month, defeating 1100 brokerages in the process. One of their brokers was chosen as the agent of the month, a significant honour given that Dubai has 6000 agents.

“I have always worked hard and wanted to make money,” said Calum, who spent two years with McEwan Fraser Legal before the opportunity came to move to Dubai in 2014.

“I joined McEwan Fraser Legal in 2012, with my first role there scheduling property viewings for clients. I eventually worked my way up to managing up to 120 homes, and I loved it before I got the chance to move to Dubai.”

“I spent some time working for local real estate companies before deciding I wanted to launch my firm. Although I’m delighted at where we are now and just how far we’ve come, I’m always looking to achieve more. There is much work ahead to catch up with the big boys!

“The fact I took a 16,000 sq. ft. office on a five-year lease in the middle of the pandemic shows my belief in what I was doing was justified. I knew we would grow rapidly.”