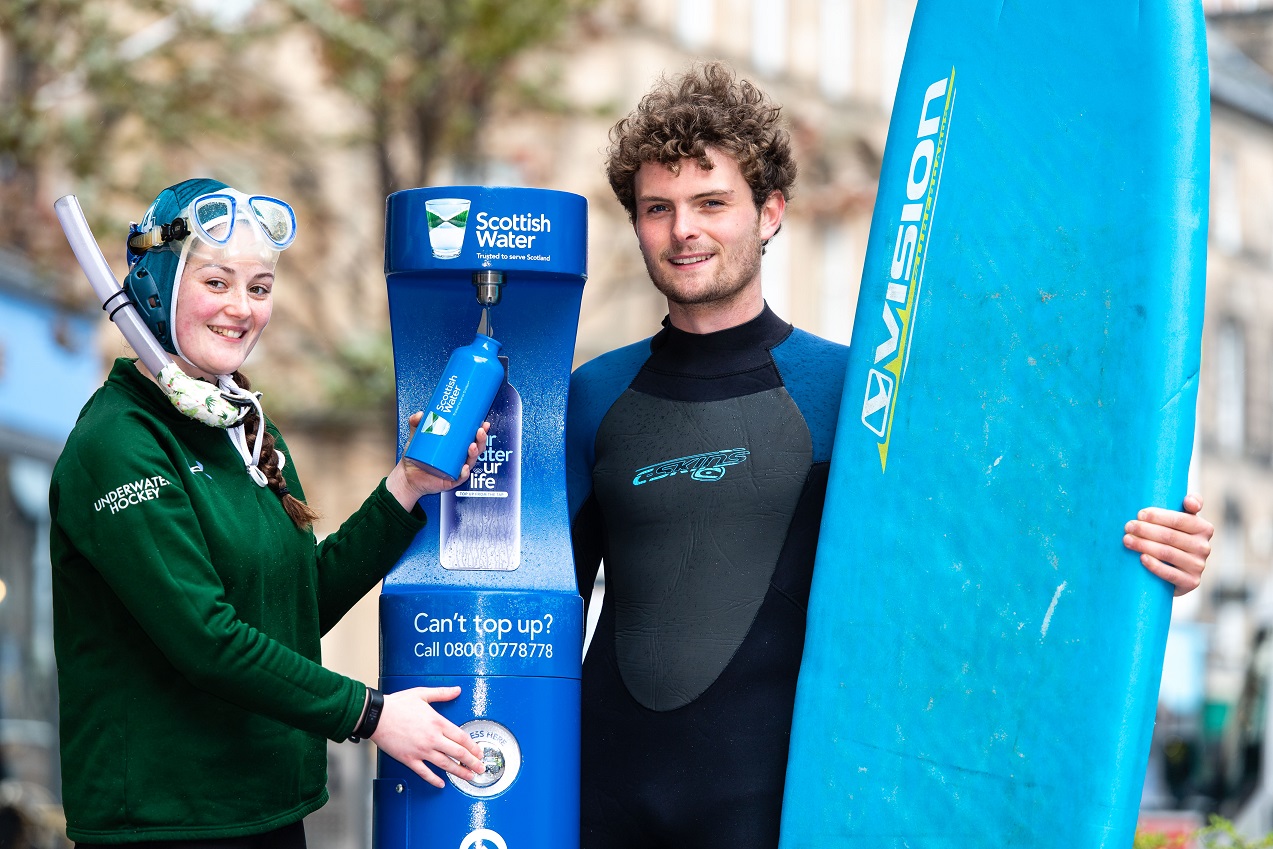 **Pics free to use** Pictured Sandy Philip president of the University of Stirling Surf Club and Iona Henderson of the University of Stirling Underwater Hockey Club Scottish Water’s newest Top up Tap installed in Stirling Scottish Water is celebrating a milestone of 40,000 litres of water being consumed from its Top Up Taps – the equivalent of 120,000 standard 330ml single-use plastic bottles. This month also marks one year since the first top up tap was installed outside the Scottish Parliament as part of an initiative to showcase the benefits of using refillable bottles and Scotland’s tap water.

SCOTLAND’S adoption of using refillable bottles to help reduce waste and keep hydrated at home or on the go has been recognised with a top creative award.

Your Water Your Life encourages people to top up from the tap, benefitting the environment, people’s health and pockets. The initiative has gathered momentum with supporters the length and breadth of the country getting involved.

Scottish Water’s programme of activity to highlight the nation’s great tap water and drive up appreciation of one of our best natural resources, won a Drum Content Award in the Public Sector Category.

Always Be Content, an Edinburgh-based creative agency, helped to develop and deliver the ongoing campaign.

The judges said ABC’s creative work “demonstrated a powerful influence on public attitudes and behaviour in reducing waste and changed public perception on a global issue”.

ABC conceived a range of creative content – across advertising, digital and social platforms – to encourage change by showing the value of using a refillable bottle and drinking tap water as part of a daily routine.

Scottish Water and ABC worked together to create the evocative campaign which captures the essence of Scotland’s water, landscapes and how people can enjoy them.

Collaboration with supporters of Your Water Your Life across Scotland has been vital to the campaign’s success. Working with large organisations such as Edinburgh Airport, Glasgow Clyde College, Aberdeen FC Community Trust to community groups, the campaign has struck a chord with the people of Scotland.

The creative activity culminated in July on Earth Overshoot day with partners and stakeholders the length and breadth of Scotland all sharing ‘Thank You Scotland’ content.

To encourage people to stay hydrated on the go using refillable bottles, Scottish Water is installing a network of Top up Taps across towns and cities throughout the country as part of the Your Water Your Life programme.

Andrew Walker, Head of Communication, Scottish Water, said: “We’re delighted that the judges recognised the part that our communications activity has played in encouraging people to not only think about how they drink water but also carry that through to making positive changes to being more sustainable.

“Our analysis has shown people in Scotland are keen to play their part in reducing waste in our communities as well as recognising that drinking water from the tap is good for them and their pockets.

“It’s clear there’s a growing movement throughout the country willing take small steps to protect the environment and working with a wide range of partners across different sectors really helps amplify the message.”

Pete Martin, director at Always Be Content, said: “Being recognised for doing what you love is a buzz. This award may have ours and Scottish Water’s name on it, but it’s really for the collaboration of so many people and organisations that have made the results real – the whole is greater than the sum of its parts.

“I’m chuffed that our hard work, our talent and enthusiasm has been rewarded by the judges and want to thank everyone who’s played a part in this success.