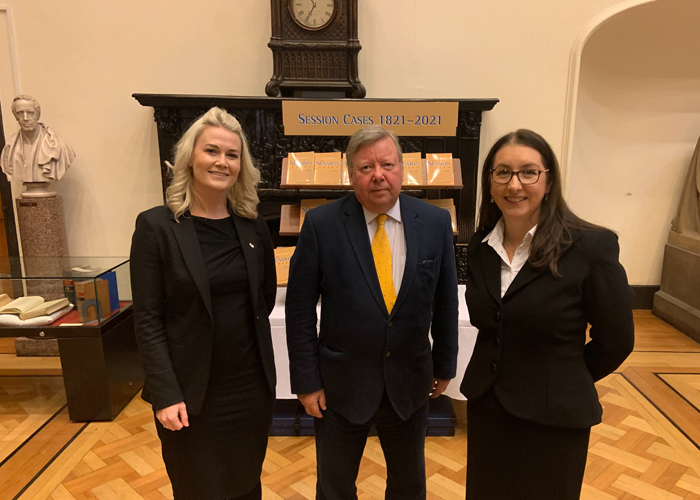 SCOTLAND’S Lord President was among the judiciary and legal professionals who gathered to mark the 200th anniversary of the longest-running series of law reports in the UK and Commonwealth.

Lord Carloway described the bicentenary as a “significant milestone” in the life of the Scottish Council of Law Reporting’s (SCLR) world-renowned Session Cases.

Addressing the audience at a special reception held in Parliament Hall, Edinburgh, on Wednesday evening (November 24), the country’s most senior judge – who himself served as one of the Session Cases’ legal reporters from 1978-79 – highlighted the importance of the publication and its reports in recording judgment of the courts.

And he commended the SCLR for its “continued diligence” in producing the reports.

During the reception, well attended by legal professionals and others with connections to the publication, SCLR Chair Angela Grahame QC touched upon the important and colourful cases reported over the two centuries.

Current editor, Emma Toner, who became the first woman to hold the role when she was appointed in February 2020, shared her pride in the publication’s standing.

Speaking following the reception, Ms Toner said: “The significance of the Session Cases in reporting and understanding the legal importance of the cases on which we report is well recognised.

“I am proud that, 200 years on from that first report, the publication is considered an indispensable tool for those involved in justice. That’s made possible by the dedication of our reporters who take time, care and pride in the work they do. My thanks go to them.”

“Whether cases of scandal, infidelity, fraud or murder, the reports record the rulings which have been – and continue to be made – by our highest courts. Having access to these allows us to understand the precedent which shapes our legal system and how this affects our lives.”

The Council thanked the Lord President for allowing the use of Parliament Hall for the bicentenary reception.

The Session Cases feature all key decisions from the Court of Session, as well as those on Scottish appeals to the House of Lords, the Privy Council and the Supreme Court of the United Kingdom. Since 2016, they include decisions of the Sheriff Appeal Court in civil and criminal cases.

The purpose of law reporting is to provide a record of judicial decisions in cases heard in the courts, in order that the legal principles identified in a court opinion can be accessed and understood by the reader and any legal principles or rules in that decision be applied as authority to support legal argument in subsequent cases. That purpose remains today as it was in 1821 when Session Cases began its publication.

Many of the reporters who have contributed to the cases have gone on to hold high legal offices, including Lady Paton and Lord Ericht among today’s senior Scottish judges.

Only The United States Reports of the US Supreme Court has been in publication longer than the Session Cases.

Lindsays lawyers get on their bikes to support Cash for Kids