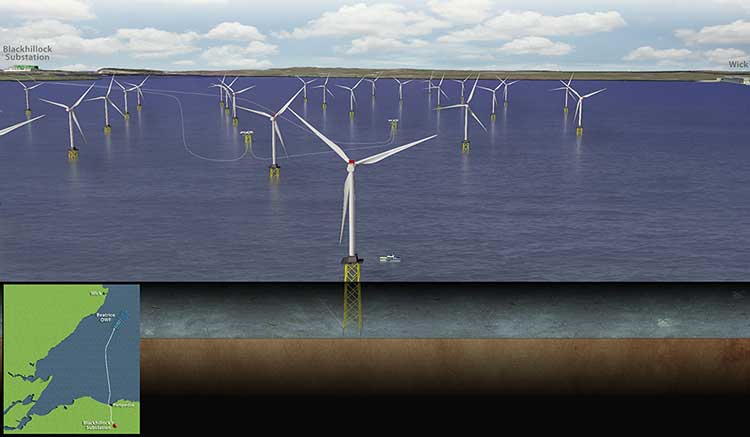 The world’s fourth largest offshore wind farm – and Scotland’s biggest – has been officially opened by HRH The Prince Charles, The Duke of Rothesay, today.

Situated in the North Sea, 13km off the coast of Caithness, Beatrice’s 84 turbines will generate 588MW of energy – enough to power 450,000 homes every year – and save around 8m tonnes of harmful carbon emissions over its expected 25-year lifetime operation, playing a crucial role in the UK’s efforts to combat climate change.

The £2.5bn Beatrice project is the largest ever single private investment in Scotland and was developed by Scottish-headquartered energy firm, SSE Renewables (40%), with Copenhagen Infrastructure Partners (35%) and Red Rock Power Limited (25%).

Construction of the wind farm, Scotland’s single largest source of renewable energy, has provided a £2.4bn economic boost to the UK, of which £1bn went directly to Scotland, supporting 19,110 years of employment in the UK during the development and construction phases, of which 7,180 were in Scotland.

“Today is about celebrating the hard work, innovation, drive and collaboration of thousands of people from across Scotland, the UK and further afield who all played their part in building Beatrice, which is now Scotland’s largest offshore wind farm and the fourth largest in the world.

“We’re incredibly proud it’s been delivered on time and under budget, even when dealing with the challenges the North Sea and deep waters bring. We’re especially proud of the significant positive impact Beatrice has already made to the communities of Wick and Caithness, and which will last for decades to come.

“The UK has the biggest offshore wind industry in the world and this world-class offshore project paves the way for future development in Scotland and the UK to help decarbonise our economy while boosting jobs and growth.

“Most importantly, Beatrice will save around 8m tonnes of harmful carbon emissions over its 25-year lifetime operation, making one of the most significant contributions across the UK in combating climate change and meeting our net zero ambitions.”

HRH The Prince Charles, The Duke of Rothesay, officially opened the Beatrice operations and maintenance base in Wick which has seen a £20m investment in its harbour front, including the sympathetic renovation of two, 200-year-old buildings originally designed by renowned Scottish architect Thomas Telford.

SSE Renewables will operate the project, which will support up to 90 long-term jobs – from offshore technicians to office administrators – with the majority based in the rural community of Wick.

Beatrice will also benefit the local community to the tune of £34m over the lifetime of the wind farm. Two Beatrice Community Benefit funds, totalling £6m, have been established to deliver sustainable investment in the local community including coastal towns and villages as well as the wider Highland and Moray areas. Beatrice has paid a further £28m into a Coastal Community Fund, which will be delivered by the Scottish Government.

“Wind energy provided a record-breaking 17% of the UK’s electricity last year, an increase supported by sustained government investment which is enabling the sector to grow, now contributing £2.4 bn to the UK economy, while driving down costs.

“Beatrice will support nearly 400 jobs in Scotland and today’s grand opening reinforces our world-leading credentials in seizing the economic opportunities of the global shift to a greener, cleaner future.”

“I want to offer my sincere congratulations and those of the Scottish Government to everyone involved in completing the £2.5bn Beatrice Offshore Windfarm. At 588MW it is the largest offshore wind development in Scotland to date and can provide electricity for a huge number of homes and businesses.  I am also very encouraged by the positive impacts the project has had, such as the regeneration of Wick harbour and the role Scottish fabricators and suppliers have played in its construction.

“In order to maximise economic opportunities a collaborative effort is required between Governments and industry to ensure that our vision for a vibrant offshore wind sector in Scotland is achieved.

“There is a significant pipeline of consented projects, including two further consented sites locally, and, as we look to future licensing rounds, we will seek to fully exploit the wider offshore wind sector opportunities for the Scottish economy while showing due regard for our incredible marine environment. This site, in an area once the home to an active oil field, but now home to this tremendous renewable energy development, is now a very tangible example of the global low carbon transition that is now well underway.”

“Having been part of the development and construction of Beatrice, we are pleased that this offshore wind farm is now feeding green, renewable electricity into the grid. The project will make a positive impact to the local communities, to Scotland and to the UK. The official opening of Beatrice today is another milestone in our offshore wind strategy, where we are developing, constructing and operating offshore wind projects globally.”

“It’s fantastic to see so many people come together in Wick today and give Beatrice the recognition it deserves. The wind farm’s legacy within the local community, the Scottish supply chain and offshore wind industry for generations to come is a huge achievement and we look forward to seeing how key learnings can be applied to other developments.”