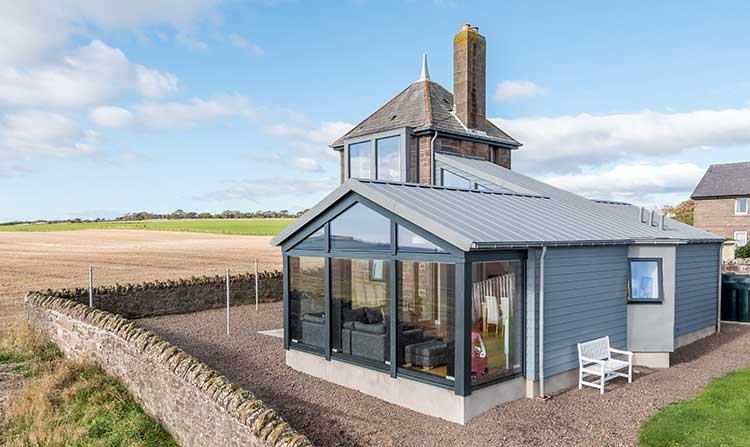 The Large Renovation Project award was won by MCK Construction from Montrose for a conversion of a derelict coastguard lookout tower into a family home.

The best builders in Scotland were recognised and celebrated at the 2019 Scotland Master Builder Awards recently.

Hosted by the Federation of Master Builders the awards showcased examples of high-quality craftsmanship, exceptional customer service and building excellence.

Now in its 14th year, the Master Builder Awards provide an opportunity to recognise and acknowledge the hard work and contribution that small to medium-sized building firms make to Scotland’s construction industry.

Gordon Nelson Director of FMB Scotland said: “I was captivated by the range and quality of nominated construction projects which our members, as Master Builders, have been delivering across Scotland. Our independent judges had a challenging time selecting the winners.

“The awards reinforce why Master Builders are the best in the building industry and they provide us with the opportunity to give our members the recognition they deserve for their dedication and commitment.”

“It was great to welcome some new entrants this year, with members from Shetland to East Ayrshire entering projects into the awards.

“We’re also grateful for the support of our sponsors who help to make events such as these possible, and enable us to bring our members and their clients together to help celebrate a job well done.”

The winners from the Scotland awards are now in the running to win a UK category title at the national Master Builder Awards ceremony on Friday, 20th September at the InterContinental Hotel, Park Lane, London.

The Medium Renovation Project award (costing over £50,000 but under £150,000) went to Martin & Sons Builders from Kilwinning for a comprehensive re-design of kitchen, living and dining room extension and garden make-over.

The Large Renovation Project award was won by MCK Construction from Montrose for a conversion of a derelict coastguard lookout tower into a family home.

Fleming Buildings was highly commended for its restoration and refurbishment of the former Portland Arms Hotel in Galston, East Ayrshire – a project that collected two commendations.

The Heritage award brought a highly commended citation for MCK Construction with the main award won by Falkirk-based Haldane Construction Services for an extension to an 18th century tower in Bo’ness, West Lothian.

Kevin Wilson Joiners and Building Contractors from Bridge of Allan took the Commercial Project trophy for the restoration and conversion of a run-down tennis pavilion into a modern café. The Public Sector/Local Authority award was picked up by D.I.T.T. Construction from Lerwick for a 70-room centre on Shetland for adults with learning disabilities.

A particularly warm reception for the Apprentice award was given to Jemma Sykes from Barratt North Scotland, with Damian Galazka of Bathgate-based Taylor Roofs highly commended.

Arguably most intriguing of all was the Heavenly Builder award to mark “professionalism, courtesy and exceptional customer service”. This was won by David MacGillivray and his Forres team.

Finally, the FMB’s Outstanding Contribution award was collected by Jim Gilmour from Glasgow, a prominent FMB figure and advocate for the construction industry.