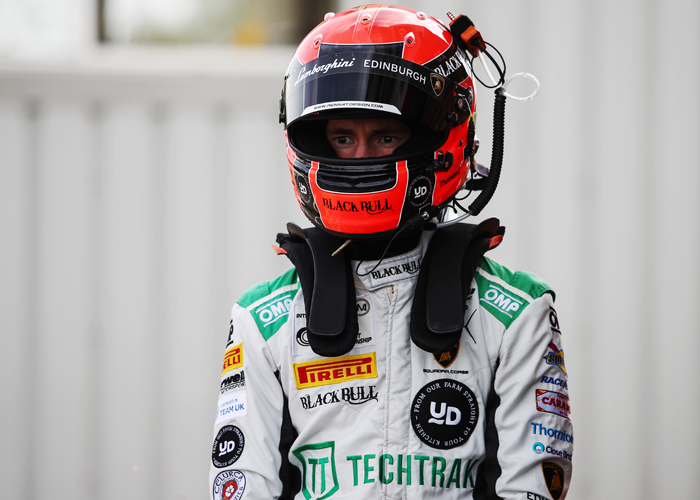 SCOTTISH endurance racer Sandy Mitchell returns to Silverstone this weekend (May 7/8) for the latest round of the British GT Championship. And the 22-year-old from Forfar is determined to bag a hat-trick of maximum point at the home of British motorsport.

Mitchell has happy memories of the Silverstone 500, the Blue Riband event of the championship. Not only did he leave the Northamptonshire circuit 12 months ago with maximum points, but in 2020 he sealed the British GT title when he won the three-hour race with team-mate Rob Collard.

“I’ve always loved racing at Silverstone, stated Mitchell, who will again partner Adam Balon in the No 72 Lamborghini Huracan GT3 Evo, prepared by Barwell Motorsport. “I’ve got really good memories of the track.”
And after the frustration of the opening double-header at Oulton Park last month, the Scot is focused on igniting his assault on the 2022 title battle.

“Oulton didn’t go the way we had planned due to circumstances outwith our control,” acknowledged Mitchell, personally backed by Huntly-based Black Bull Scotch Whisky and Tunnocks, “but we know we can push hard for the win at Silverstone.”

“The Barwell guys always deliver a fast and reliable Lamborghini, and we know the car suits Silverstone, so we’ll be pushing hard to bag our first win of the year.”

“We had a very positive test at Silverstone earlier this year, and everyone in the team was pleased with the pace and times we set. Now we have to replicate that first in qualifying, then in the three-hour race.” Mitchell, a Lamborghini factory driver and member of the British Racing Drivers’ Club, continued.

“It’s the longest race in the championship, which means strategy plays a big part in the outcome. It’s all about anticipating and then reacting to incidents, and in the Barwell boys we have many, many years of experience in managing races.”

“We all know if we get the calls right and we manage to stay out of trouble, we have the pace to be fighting right at the sharp end of the race. Do that, and we’ll be in the mix for the win.”