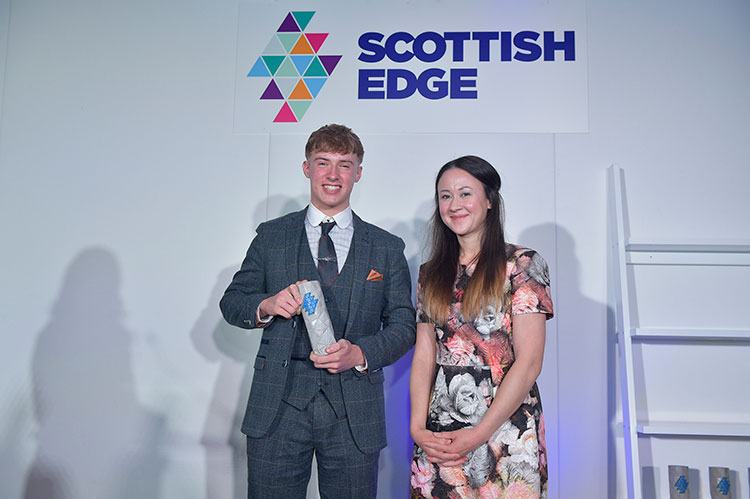 MacIsaac Ltd founder, Robbie MacIsaac, who until his recent graduation was Head Boy at Strathallan School, fought off strong competition to emerge as the £15,000 Creative EDGE winner of Scottish EDGE Round 14 with his innovative flux blowpipe, a device which prevents moisture build-up in bagpipes and prevents the serious ‘Bagpipe Lung’ condition.

The Creative EDGE Award, which was introduced with support from Creative Scotland and Cultural Enterprise Office to encourage applications from the creative sector, was keenly contested in this round of the competition with the sector being the second highest represented at application stage.

Of the 289 applicants that applied to Round 14, MacIsaac was one of 29 businesses to receive collective funding of over £1m. The business pitched in the Wildcard EDGE category for businesses who have yet to commence trading, and received the top £15,000 Creative EDGE prize, a further six winners received £10,000.

Although having only recently founded MacIsaac, Robbie’s idea for the flux blowpipe has been over four years in the making and was realised with the assistance of prototyping firm, Angus 3D Solutions, to whom Robbie reached out following a presentation given at his school.

The 18-year-old’s hope for the blowpipe is that it will prevent moisture build-up from impacting on an instrument’s integrity and sound quality, as well as reduce the incidence of ‘Bagpipe lung’ – a rare but fatal condition caused by mould and fungi accumulation, which can inflame the lungs.

Commenting on his award, Robbie said:

“The Creative EDGE award will allow me to finalise the prototype of my product using the most suitable materials, giving me the opportunity to refine and improve the version of the product that will go to market. It also allows me to progress with the patent process and secure the rights to the technology. This is a very meaningful step in my entrepreneurial journey, I have learned a great deal and enjoyed the process of the EDGE competition.”

As the UK’s largest business funding competition, Scottish EDGE has awarded over £14 million thus far with prizes given as a 40% grant and a 60% loan and a maximum award of up to £150,000. The loan is paid back to help fellow entrepreneurs on their pathway to success. Both the Young EDGE and Wild Card EDGE awards are grants of up to £15,000.

MacIsaac now joins Scottish EDGE’s roster of 369 winners to date, who thus far, excluding Round 14, have generated an additional £131.29 million in turnover, secured £108.33 million in additional investment and created 1,652 jobs.”

“Prior to the introduction of the Creative EDGE award, the Creative Sector was among the most underrepresented at the application stage of our competition, now it’s consistently one of the highest. Thanks to its success, we are able to identify and support great businesses like MacIsaac.

“Robbie’s pitch, which included a full-on bagpipe recital, was one of the most memorable we have seen. He is extremely entrepreneurial and has caught the attention of the largest bagpipe manufacturing company in the world with his new moisture control technology. We look forward to supporting his business as he takes his product to market.”