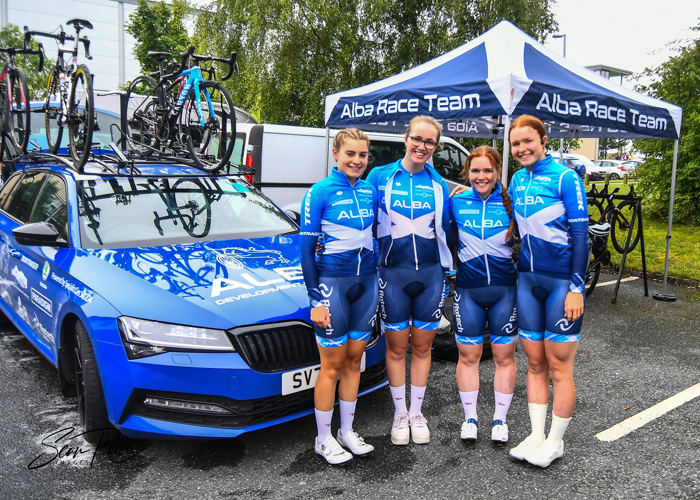 SCOTLAND’S only all-female elite cycling team have rounded off their maiden season in spectacular style by sweeping the board at the Rás na mBan in Ireland.

Set-up to help female talent realise their dreams of competing against the world’s top riders in the biggest races, it has been a successful September for the Alba Development Road Team after Kate Richardson took victory and Arianne Holland finished second in the Scottish National Circuit Championships in Aberdeen last weekend.

Richardson, who turned 20 yesterday (September 12), only made the permanent switch from triathlon to cycling in the summer of 2021, and has already shown her potential with a series of strong performances, culminating in the four-jersey hall in Ireland.

Kate said: “It was a tough few days, but it was certainly worth it! I am delighted with how everything went, and really proud of the whole team. We all worked incredibly well together, and this was a fantastic way to end the season.”

“I have really enjoyed my first full season as a cyclist and being able to go and win events like this makes me realise I made the right choice last year. There is something new to learn from every race, and hopefully as a team we will be able to take the success we have all enjoyed into next year.”

Alba DRT Performance Director and Team Manager Bob Lyons said: “We said when we started the team that it was about more than wearing the same colours and achieving race results. We want to give female riders the tools and the platform to succeed, and the strong performances over the course of our first season have shown that the talent is there.”

“I am delighted that Kate had so much success across the season and in the Rás na mBan. It’s a great result for her as an individual, but as so many sportspeople will tell you, their success would not have been possible were it not for their team-mates, and I’m sure Kate would say that is the case here.”

“The team are all naturally talented, but more than that, they are committed and focused on giving their all for themselves and their team-mates.”

The team – which consists or Richardson, Holland, Sophie Lankford, Sophie Enever, Beth Maciver Vicky Smith, Erin Murphy and Erin Smith – have competed in track and road races across the UK, clocking up hundreds of thousands of miles between them.

Lyons added: “I am extremely proud of all of them. It has been an excellent first season that has seen everyone grow in stature. They came together as eight individuals last year, and have developed into a team.”