Recognition of bright sparks at the 2019 SELECT Awards ceremony 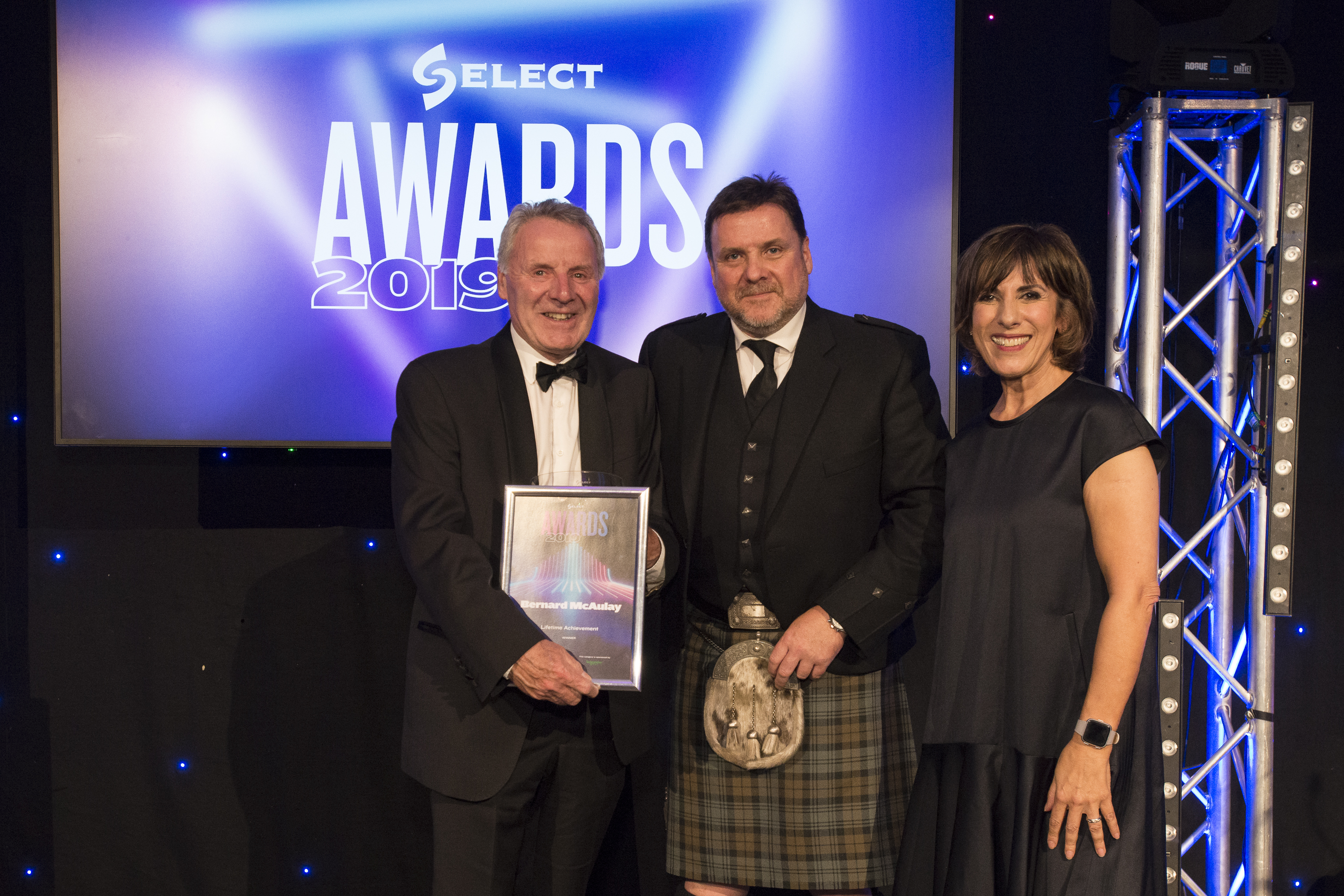 Bernard McAulay being presented the Lifetime Achievement Award by Neil MacEachern of Schneider Electric with broadcaster, Shereen Najiani who compered the awards ceremony

IN A year in which the Scottish electrical industry took another historic step towards being recognised as a profession, SELECT, the country’s largest trade association, last Friday paid tribute to the sector’s leading talent, drive and enterprise.

Behind the glitz and glamour of the campaigning body’s annual awards ceremony at the Radisson Blu hotel in Glasgow was burgeoning support from all quarters for moves in Holyrood towards Protection of Title.

The ceremony also coincided with the cinematic showing of The Current War, a Hollywood film which highlighted the way that electrical power transformed the world and took societies everywhere out of literal darkness.

In a world which is increasingly dependent on electrotechnology, SELECT singled out some of the individuals and companies which have stood out from the crowd and delivered particularly outstanding services.

Electrical professionals from companies large and small, and from every part of the country, gathered in Glasgow to submit themselves to the critical judgement of their peers – and emerge as winners.

Alan Wilson, Managing Director of SELECT, said: “There has never been a more exciting time to be part of the electrotechnical industry, a sector which underpins everything we do in our day-to-day lives.

“Scotland’s electrical trade has earned and maintained a reputation for quality, craftsmanship and excellence and SELECT has been instrumental in raising awareness of quality, safety and the highest possible standards.

“The 2019 awards are all about recognising top performers and once again we have been astounded by the response from companies throughout Scotland. Every one of them is a worthy winner.”

As an example of the growth the sector has experienced, the Best Large Contractor award went to Ayrshire-based Booth Welsh, which has transformed itself from a local company in Irvine into a globally operating concern with hundreds of employees.

Alan Wilson said: “Scotland is very lucky have major players like Booth Welsh – which have gone out into the world and come back with hard-won export orders – in its industrial and commercial portfolio.”

The Lifetime Achievement Award, sponsored by Schneider Electric, was made to Bernard McAulay, Unite the Union’s national officer for construction, allied trades and technicians, who is also a member of the Scottish Joint Industry Board (SJIB).

Alan Wilson said: “Bernard McAulay’s focus over the course of many years of high-level union activity and negotiation has always been on the workers he represented and he has never sought the spotlight for himself.

“Like many of the people he represents, he has always been a hard worker. He is not only tenacious and determined but is well known throughout the industry as being very capable of driving a hard bargain on behalf of his members. We are delighted to be able to pay tribute to him.”

The evening was hosted by popular radio and television personality Shereen Nanjiani and was attended by more than 350 guests from a wide spectrum of companies, ranging from major electrical enterprises to local firms, illustrating the diversity and strength of Scotland’s electrical sector.

Founded in 1900, SELECT is Scotland’s largest trade association. It has nearly 1,250 member businesses who collectively have an annual turnover of around £1billion and employ over 15,000 people and 3,500 apprentices. SELECT also delivers training courses to more than 3,500 electricians each year and is committed to regulation of the industry for a safer Scotland.

The organisation helps to shape the market environment by representing the industry to all levels of government and helps influence legislation to create industry conditions which enable member firms to provide a quality service and to maintain their profitability.