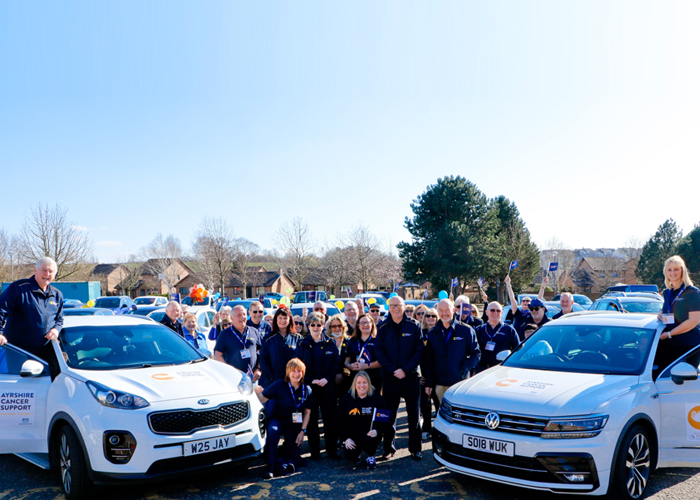 THE QUEEN has awarded her highest possible Royal honour for volunteer groups to a leading Scottish cancer support charity as part of her platinum jubilee celebrations.

Ayrshire Cancer Support has been granted the prestigious Queen’s Award for Voluntary Service in recognition of its vital work across the community.

It is hoped the endorsement will boost the charity’s fundraising efforts to open a dedicated new cancer support centre in Ayr by further raising its profile across the UK. The project needs to raise significant funds from the public and corporate partners to reach its goal.

Chief Executive Officer Sandra McCall hailed it as recognition for all involved with Ayrshire Cancer Support, saying: “It is such an honour and on behalf of all of us we thank Her Majesty for this truly wonderful recognition in what is such a special year for her.”

“It is only right that this accolade should be dedicated to our hundreds of volunteers – without whom none of what we do would be possible. This is a crowning moment in our history so far and we are so very grateful. It will act as a springboard for everything that comes next.”

“We are bouncing back again after the pandemic when we lost so many of our volunteer led shops, and we are so happy to be able to launch services specially tailored for the youngest cancer patients in our community, and our new dedicated Ayr centre is within touching distance.”

“To be granted an award like this by the Queen is a wonderful privilege and shows that every second, every minute and every mile our team spends supporting others in need is being noticed up and down the country at even the highest levels.”

“We hope it will mean others take notice of our work and encourages them to support our efforts in any way possible.”

Ayrshire Cancer Support provides emotional and practical help to those affected by cancer with a team dedicated to improving the quality of life to those living with cancer by making sure help is available to all who need it throughout the entire area.

Working between their support centres and hospitals it offers a range of free therapeutic services, support groups and counselling and complementary therapies to those in need, and specialised and tailored services to children and young people.

One of its key and founding roles is providing hospital transport service staffed by volunteer drivers who collect patients from home, take them for treatment and return them back again in a large, diverse and often rural part of the country.

The accolade is icing on the cake on its own celebrations – 40 years since volunteers first began helping patients from a single car back in 1982 evolving to become the vital community support network it is today.

The charity has more than 240 volunteers and 20 staff, and was nominated for the Queen’s Award by Gayle Wilson based at Ayrshire Business Women with supporting letters from other individuals, later going through local and then national scrutiny.

Sandra was only recently told of Buckingham Palace’s decision, but she was sworn to secrecy until today’s announcement for the Queen’s official celebrations.

“It is also a moment, though, to pause and reflect on all those who we have been with right through their cancer journeys some of whom happily we are still in regular contact with and all of those who are no longer with us.”

“Most if not all of us will know of someone touched by cancer which is why this award from Her Majesty should add further encouragement to all involved in the vital work and services.”

As well as receiving the award the charity will be presented with a domed glass crystal to mark the achievement by the Lord Lieutenant, and two volunteers from Ayrshire Cancer Support will be invited to attend a garden party at Holyrood house in July 2023.

Louise Graham, Director of Services, said the award was a thrilling and deserved recognition for all the work that goes on right across the charity.

She said: “Her Majesty has given a lifetime of service to the country and for her to endorse the commitment of everyone here is the ultimate recognition.”

“There simply is no higher award she could have conferred on us, its awarded for life and the equivalent to an MBE, and only possible thanks to the dedicated and expert work of our colleagues, volunteers and supporters who provide such an essential range of services.”

“They make us proud every day and hopefully this unexpected thrill from the Queen allows them to experience a moment of pride in what they do, in honour and memory of everyone who has been connected with our charity over the last 40 years.”

This award follows on from the charity’s longest serving volunteer, Yvonne Morrison – who has been driving for Ayrshire Cancer Support since the charity began in 1982 – being awarded with a British Empire Medal (BEM) in 2016 after being nominated by grateful patients.

To support the charity’s ‘Make It Happen‘ appeal to open a new centre in Ayr donate here.