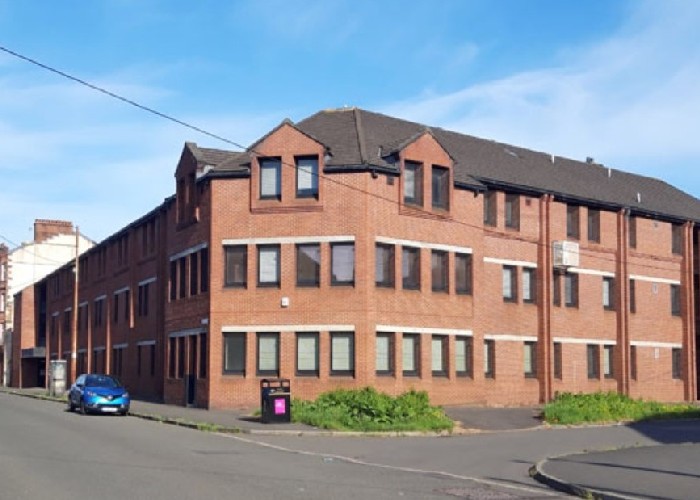 A PROJECT to convert a former Department of Work and Pensions Job Centre building in Bridgeton’s Muslin Street into 49 new homes for private rental has finally been given the go-ahead by Glasgow City Council following a planning review.

Glasgow-based Spectrum Properties first submitted plans last year to turn the property, which was closed by the UK Government in 2018, into 39 one-bedroom and ten two-bedroom flats, but they were rejected.

Family-owned Spectrum Properties acquired the property in April 202 after it was marketed by property agents, Savills. Initially, its change of use planning application for 49 dwellings was rejected by the planning authorities.

The company had argued that the plans would provide a “sustainable re-use of a redundant building” as there is “little likelihood of the building being returned to a commercial use due to lack of demand” and that “the proposals require minimal structural intervention (to) provide 49 residential apartments in an area with little other alternative than housing associations with long waiting lists.”

It continued: “to the rear of the site it is proposed to reduce the extent of the car park to provide residential amenity, with planting to encourage biodiversity, as well as a reconfigured car park to accommodate disabled parking spaces.”

Spectrum Properties Managing Director Bill Roddie said: “We are delighted that the planners have had a change of heart and that we now have the green light to undertake the work on these good quality private rental apartments that are in great demand in the local area.

“With only some very minor amendments, our original planning proposal stands, and we anticipate the new apartments will be ready for occupation by local people by late summer 2022.”

Spectrum Properties, which focuses primarily on commercial property and owns some 700 such properties across Glasgow, has in recent years moved increasingly into residential development.

One of the largest property companies in Scotland, it has converted sites such as Hillhead High School in Cecil Street, Glasgow, the former Hydepark Public School in Springburn, and Shettleston Public Baths, into quality residential accommodation.

The Shakespeare Building in North Kelvinside is the latest in a long line of architecturally significant properties which have been kept in the city’s heritage portfolio by Spectrum, using advanced preservation and restoration techniques such as façade retention

Spectrum Properties directly employs 75 people and the same number of sub-contractors. It is actively recruiting to cope with rapid expansion. Established by Mr Roddie in 1988, the company now has a portfolio valuation of £60 million and a turnover more than £5 million.